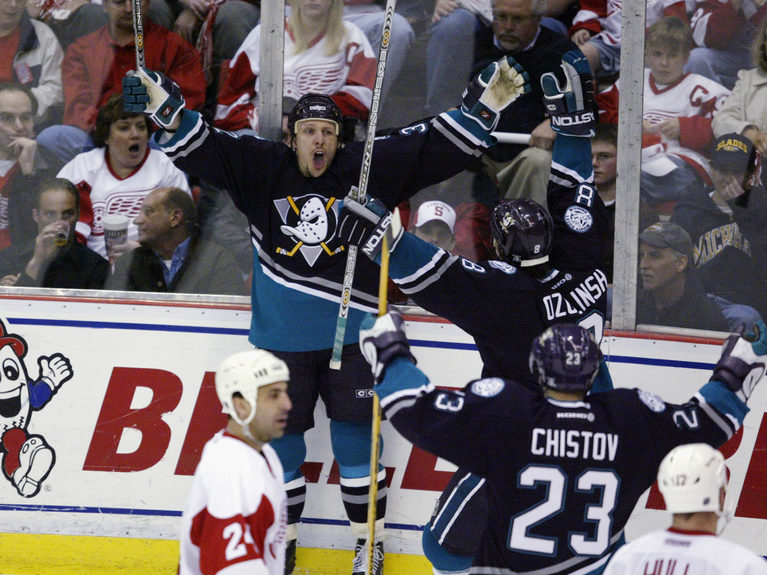 The “12 Days of Christmas” is a classic holiday song first published in its current form in 1908. In a nod to the classic carol, join The Hockey Writers as we count down the 12 Days of Hockeymas. Each day we will provide you with a piece of hockey history as we eagerly await the start of the 2020-21 NHL season.

Every child athlete dreams of becoming the star of the team, the next big pro athlete or attending a college on scholarship because of their abilities on the ice or whatever it may be. Well, professional athletes have a dream worth mentioning as well.

When the Ducks hit the ice, hockey fans and Southern Californians alike held their breath waiting to find out if they would bring the Stanley Cup to California.

After finishing fourth in the Pacific Division and ninth in the Western Conference in their inaugural season, Anaheim had a solid start to their franchise. In the 2002-03 season, the franchise took home their first Western Conference Championship. While the Mighty Ducks missed the mark that year in seven games against the New Jersey Devils, the team made it’s mark as a force to be reckoned with.

The Mighty Ducks were sold in 2005 to the Samuelis and changed their name to the Anaheim Ducks. The following year, ultimate success was brought to Southern California. After taking the season with a 48-20-14 record overall after a season of changes. In 2006, the Arrowhead Pond was renamed the Honda Center in conjunction with the new Ducks name.

“Obviously, we are in a situation we’d like to be in,” Teemu Selanne said in an article in the OC Register. “We have given ourselves a chance to win something big, but we have a big challenge coming.” (from ‘Ducks take 3-1 lead in Stanley Cup Finals,’ OC Register, 06/04/2007)

The Race to the Stanley Cup

As the Western Conference’s second seed, the Ducks faced the Wild in the first round, 4-1. The team was led by the likes of Selanne, Corey Perry, Ryan Getzlaf, Scott Niedermayer, Jean-Sebastien Giguere, just to name a few, and it truly was a great, cohesive team.

In Game 5 of the series, Giguere had his first start in eight games and stopped 26 goals. Moving forward in the series was a huge step for the young team.

According to ESPN, “It’s been an emotional couple of weeks,” Giguere said about the series win over the Wild. “A lot of things have happened. Just getting back in there and winning a hockey game was awesome. But I really can’t take credit for this series.”

In the second round of the Stanley Cup Playoffs, the Ducks faced the Vancouver Canucks. During the first game, Anaheim came out on top with a hat trick and assist for Andy McDonald with a 5-1 victory to kick off the second round.

The momentum of the series continued and finalized the Ducks’ Round 2 win with a 2-1, double-overtime win in Game 5 at Honda Center.

According to an article from The Hockey Writers, Randy Carlyle was the fifth coach of the organization and the first to lead Anaheim to hoist the Stanley Cup with his coaching style that worked in the Ducks’ favor.

“Each game had its momentum swings and we were fortunate to come out on the right side of the close games,” Carlyle said according to CBC. “We were in a heck of a series against a really good hockey club.”

After facing the Detroit Red Wings in the playoffs for the fourth time in organization history, the Ducks at last won, 4-2, and finally overcame the superstition.

“You’re just waiting for those seconds to end,” Rob Niedermayer said, “And then when they do, that flood of emotion just hits you. The NHL playoffs are one of the hardest things to go through.” (from ‘How the Ducks won the 2007 Stanley Cup: A game-by-game recap,’ OC Register, 06/06/2017)

Anaheim succeeded victory and hoisted the Stanley Cup in five games against the Senators in the 2006-07 season.

On the first day of Hockeymas the Ducks gave to fans, a Stanley Cup for the first time.