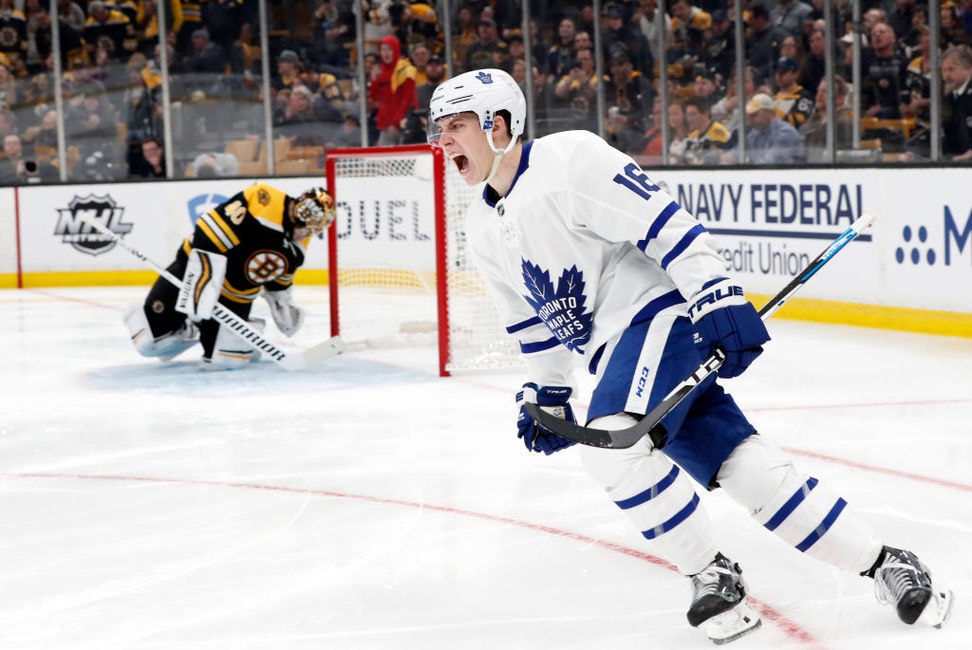 Toronto Maple Leafs forward Mitch Marner is a talented player. There’s no doubt about that.

While his passing, quick hands and speed stand out, we’ve yet to see him consistently put up goals. His career-high was 26 in 2018/19 where he had a career high 94-point season and only has two 20-goal seasons. William Nylander has three, including 31 last season and already notched two goals in their season opener against the Montreal Canadiens.

Marner is an important player for the Maple Leafs. Imagine how much more of an impact he can have if he consistently puts the puck in the net. Fans would love to see more than an average 25-goal season considering the elite skill level that he possesses. We’re not expecting him to score 40+ a season like Auston Matthews, but it’s possible that with that shooting mentality, Marner can be more dangerous than he already is.

Marner Needs to Be Greedy

It’s clearly evident that Marner has the play-making abilities that any team would love to have. Although, it seems that’s all he’s known for. Matthews has gone from full-time sniper to taking on a two-way presence without diminishing his original capabilities.

While he’s part of the penalty kill, Marner’s offensive game has been kind of stagnant. Not in terms of point production, but how he gets those points. Since his rookie season, he ranks ninth in assists in the league with 209. Very respectful for a young player that’s among some of the leagues best playmakers like Patrick Kane, Artemi Panarin and Claude Giroux to name a few. If he wants to be known as more than a playmaker, then he needs to get greedy at times.

The difference between Marner and the rest of those players is noticeable. Here’s a look at Marner’s goals, assists and shooting percentage compared to others with his skillset from 2016/17 to now.

It’s apparent that Marner has the least amount of goals and SH% compared to everyone else in this group. Even his goals per game average is lower compared to everyone else. Despite a low amount of shots, he does generate chances. Though the conversion rate isn’t as strong as the others as his accuracy does tend to be inconsistent.When he was in his draft year, he was immediately drawing comparisons to former London Knight star in Kane as they possessed the same quickness in setting plays up and getting a shot off quick. Kane’s goal total has fluctuated in his career, but he recorded 30 goals in his third season compared to Marner’s 26. He may not score 40, but 27-35 isn’t out of the question, but there is a path for him to be a lethal shooter like Kane.

Heading into camp for the upcoming shortened season, he changed his mindset as he now shifted his focus to shooting the puck more and add to his goal totals. In an article by Josh Clipperton of The Canadian Press, Marner made this abundantly clear that he wants to be “around the net” more. Clipperton adds that Marner hasn’t scored in his last 11 games in the postseason.

As someone who excels at distributing the puck, this could definitely help Marner be more comfortable as a shooter. The issue with him as it was in the past is he elects to pass when he should shoot and he shoots when he should make a play. Especially last year, he always seems to wait for the perfect opportunity to make a pass and he tends to lose handle of the puck as a result of it. That has to change and Marner is making that adjustment to his game that if there’s a prime opportunity to score, he should take it.

During the first intermission of the Maple Leafs season opener broadcast, Elliotte Friedman mentioned that Marner changed his stick flex, which should work well for him to adjust his shooting and accuracy. It doesn’t seem like much, but a simple change like that can make a difference when getting the puck off the stick quickly and effectively. As he continues to work on his shooting and accuracy, he’ll be more comfortable in that shooter role.

Marner Has Less Pressure to Be the Setup Man

When the Maple Leafs added Joe Thornton in the offseason, the expectation was to help be a vocal presence and mentor for the young stars. But when head coach Sheldon Keefe revealed that Thornton would be on the top line, he would now be coming in to take a lot of pressure off Marner to just create plays as he now has the opportunity to even more quality looks at the net.

With Thornton looking to be the setup man, Marner now has the chance to be a second shooting threat alongside Matthews. This is a topic that Andrew Forbes discussed in a recent Maple Leafs roundtable as well as on Episode 20 of the Sticks in the Six podcast in length.

Here’s a look at Marner’s individual shooting and goal production in his first four seasons with the Maple Leafs.

Marner’s highest shooting percentage came in his rookie season, but he started to see a decline in his conversion rate despite an increase in his shots on net after that. Last season was the lowest shooting percentage and individual shots on net that Marner had. Granted, he missed games as he was sidelined with an ankle injury for four weeks. Despite that injury, over an 82-game pace, Marner could’ve matched his 94-point season that lead to his massive $10.9 million contract.

This is where things can get interesting for Marner. He can still be a crafty setup man, but this wouldn’t be his “go-to” mentality anymore. He can create space for his teammates when finding open lanes for a pass, but he can also that create space for himself finding those open areas where he can get a good shot on net or scoring chance.

When He Uses it, Marner Has a Good Shot

Much like changing his stick type, Marner needs to get back to what made him a highly regarded pick in the 2015 NHL draft.

When looking back on Marner’s early years of development, he was a superstar with the London Knights. In two seasons, he posted 242 points with 159 being assists. Now, considering that he was already displaying his skillset as that high-end playmaker, he still managed to score 83 goals. Coincidentally, we see a similar pattern between his goals and assists numbers then and now, but Marner’s shot is still something that made him an offensive threat at the junior level. He is elusive to get to the open areas on the ice and capitalize on his opportunity to shoot.

Even when he scored his first career NHL goal, you can tell that Marner has the capabilities to be a shooter in the NHL. He was able to keep his head up and pick his spot, going far side on Anton Khudobin. While he doesn’t display a unique mechanic or the strength that Matthews has, Marner’s shot is a result of combining all of his skills into one.

Even recently before the season started, we saw a sneak peak as to what we can expect from Marner as he’s on the road to becoming a shooter. Marner was able to snipe one over the glove of Aaron Dell. Even with the hesitation of dropping it back for Matthews despite a poor passing lane, Dell was still in good position but was late reacting to Marner’s decision to shoot. That is something that Marner can use to his advantage to freeze a goaltender or even get them out of position when in tight.

He still has good power and accuracy when he has the chance, he can get it through the net easily. In addition, he has a real knack for driving to the net with his speed and use his hands in tight to fool the goalie. We see this on and off at times. If he can do that consistently, then there’s no reason to believe why he can’t be an offensive threat in the offensive zone as he’s looking to add to his goal totals.

Despite the playmaking abilities, Marner needs to do more than just being an assist-first kind of player. As he becomes more comfortable as a shooter, he’s going to be very dangerous offensively.