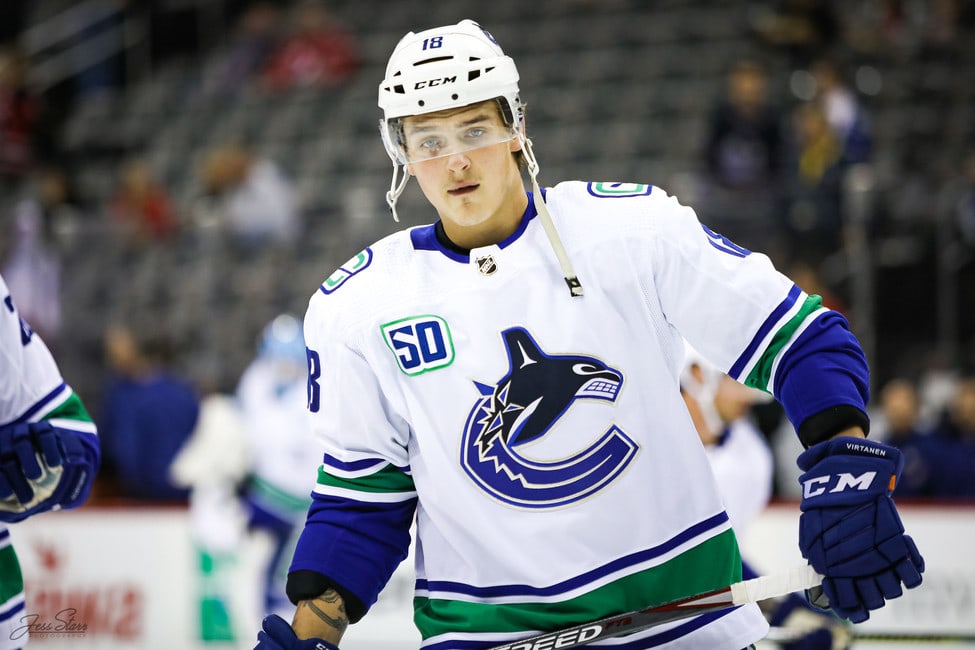 With Tyler Toffoli gone, Jake Virtanen was supposed to grab the bull by the horns and solidify a spot for himself in the top-six. Yet, 11 games into the 2020-21 season, he’s been a healthy scratch twice and rookie Nils Hoglander has not only taken his spot on the top two lines but has outperformed him by a wide margin. He already has three goals and six points and Virtanen is still stuck on one goal and does not have any points in his last five games.

Related: Canucks Motte Emerging as a Two-Way Threat in the NHL

After a career season that saw him score 18 goals and 36 points in 69 games, Virtanen was expected to take a huge step forward this season. Though, despite having a good offseason training with Tyler Myers in Kelowna, it does not look like he’s improved a whole lot. His lack of work ethic has been a problem throughout his career and it appears to have reared its ugly head once again. Unfortunately, it just doesn’t look like he has that skill in his arsenal, as we have witnessed him play the role of invisible man way too many times already this season.

When you look at players like Hoglander, Elias Pettersson, and Tyler Motte, they are successful because of their work ethic. Without it, they just wouldn’t be the players they are in the NHL. Virtanen has been given multiple chances to prove that he belongs, and is now holding a brand new two-year contract extension. Is it finally time to trade him before his value drops substantially?

Virtanen is still only 24-years-old, so teams will have interest in his skillset, despite his shortcomings. With that said, let’s take a look at three trade targets the Canucks could pursue if they decided to go down that road.

The Calgary Flames added former Canucks Chris Tanev, Jacob Markstrom, Josh Leivo, and Louis Domingue this past offseason, so what’s one more? Virtanen certainly knows Calgary after spending his entire junior career with the Calgary Hitmen and apart from the San Jose Sharks, has seen the most success against them. Maybe playing there will ignite that fire again (pun intended), as he accumulated 85 goals and 161 points the last time he called the Saddledome home.

As for a return, the Flames could be persuaded to part with one of their own projects in Sam Bennett, who recently asked for a trade. After posting 18 goals and 36 points in 77 games during his rookie season, he has fallen by the wayside and has only 45 goals in 293 games since then. That’s just not good enough when later picks like William Nylander, Nikolaj Ehlers, Dylan Larkin, and David Pastrnak are bonified stars in the NHL right now.

Like Virtanen, Bennett is a high draft pick that has not lived up to expectations. When you look at the projections and scouting reports that came out in 2014, he was compared to Joe Pavelski and was even discussed in the same breath as Aaron Ekblad, Sam Reinhart, and Leon Draisaitl as candidates for the first-overall pick. Heck, one draft pundit called him a franchise forward.

Quite simply Bennett has the potential to be a franchise forward. He can do it all at both ends of the ice and will bring everything that teams look for. Due to the need to pack on some muscle he might not be as NHL ready as my first two ranked players, but he will be worth the wait. His style, not potential, is similar to his general manager in Kingston, Hockey Hall of Famer, Doug Gilmour.

At 24-years-old, Bennett still has the potential to be something special in the NHL. He has already established himself as a reliable two-way centerman who can win draws, so if he does nothing else, he would solidify the third line pivot position for the Canucks. He also has speed, leadership qualities, and untapped offensive potential. Since Adam Gaudette appears to be a better fit on the wing, Bennett could join him and Vasili Podkolzin in the near future as a trio that would be hell to play against in the playoffs.

Unlike Virtanen, Bennett has shown a propensity to perform in the pressure cooker of the NHL playoffs, as he has 11 goals and 19 points in 30 games. His work ethic has also never been questioned, in fact, it has been touted as a massive strength of his game.

With the Montreal Canadiens strutting around with a nearly flawless 5-1-2 record so far this season, they don’t necessarily need to make a trade. Though, with the emergence of 21-year-old defenceman Alexander Romanov, some more established players like Victor Mete are seeing their role reduced. After posting four goals and 11 points in 51 games last season and at times playing on the top pairing with captain Shea Weber, the 22-year-old has not seen a minute of ice time in eight games this season. Naturally, when that happens, trade speculation ensues. In fact, reports indicate that he has officially asked for a trade, even though GM Marc Bergevin subsequently denied it late Saturday night.

The Canucks could use more experienced depth on their backend, and Mete has the mobility and overall game to succeed in their system. He has favourable Corsi-for percentage (CF%) numbers with a career 51.4 CF% and he can play both sides, as evidenced by last year’s playoffs when he played his off-side with Xavier Ouellet. He is a terrific skater with offensive instincts who could pair well with Olli Juolevi in the future. He is also very young, so it’s not like he would be a one and done type acquisition either.

It’s looking like it’s just a matter of time before Vince Dunn is traded away from the St. Louis Blues. After three straight seasons of being a regular in the lineup, he saw his first taste of the press box as a healthy scratch on Tuesday. With the amount of depth the Blues have, scratching a defenceman of his caliber certainly speaks volumes. The game before he was banished, he played a season-low 14:19 and was a minus-2 against a supposedly weak opponent in the Los Angeles Kings. Clearly, head coach Craig Berube was sending a message to his 24-year-old veteran defenceman.

Dunn only signed a one-year deal worth $1.875 million just days before training camp, so he could be in line for a pretty big raise this coming offseason. With the Blues sitting at zero cap space according to CapFriendly and key free agents like Jaden Schwartz, Zach Sanford, Ivan Barbashev, Robert Thomas, Jordan Kyrou, and Jordan Binnington needing contracts for the 2021-22 season, they could be in trouble if they don’t shed some salary.

As I have said in previous articles, Dunn could be a perfect fit for a Canucks blueline that is bleeding goals. As of this writing, they are tied with the Ottawa Senators for the most goals against in the NHL with 36 and have at times, looked like a team from a beer league when defending their own end of the ice. Dunn could help change all that with his two-way game and ability to move the puck up the ice. In 230 career games, he has 27 goals and 84 points and boasts a 54.2 CF%. He also was a regular on the top-pairing last season with Alex Pietrangelo, so he knows how to play against a team’s top players.

Jordie Benn has played admirably with Quinn Hughes so far, but Dunn might be a better fit in the long-run. If the Canucks were to acquire him, they could end up having one of the best defence cores in the NHL. Virtanen definitely won’t be enough to get a deal done, but throwing in a second or third-round pick and maybe Brogan Rafferty could be a place to start. If the Blues are adamant about obtaining a 2021 first-round selection, I would hang up the phone, as this year’s event boasts some very high-end defencemen in the first round that could turn out to be better than Dunn long-term.

Virtanen Is Nearing the End of the Line in Vancouver

If Virtanen does not get his act together quickly this season, he is most definitely on a plane out of Vancouver. Over the last three seasons, he has been offered multiple chances to change his attitude, and just when you think he’s turned a corner, he goes right back to the beginning.

At the beginning of the season, he was given a massive opportunity to seize the day and claim a spot in the top-six alongside Elias Pettersson and Brock Boeser. Now that train has passed him by, as the Lotto Line is running at full steam, and the second line of Tanner Pearson, Bo Horvat, and Nils Hoglander doesn’t look like it’s breaking up any time soon either.

Virtanen has to either establish himself as a physical presence in the bottom-six or get used to his seat in the press box amidst rumours of his departure from Vancouver. Like Ray Ferraro stated in a recent interview, he has to figure out his identity or he won’t last long in the NHL on any team.

Unfortunately, after five seasons with the Canucks, I don’t think he will ever figure it out here. A change of scenery will be the only thing that could possibly knock some sense into him. It’s not like he doesn’t have any skill. His elite speed, wrist shot, and size are things that should help him succeed. Except a strong work ethic is also required, and I am not sure he will ever learn that skill. Maybe a new coach and a new city will give him a new attitude.

All stats were taken from Hockey Reference