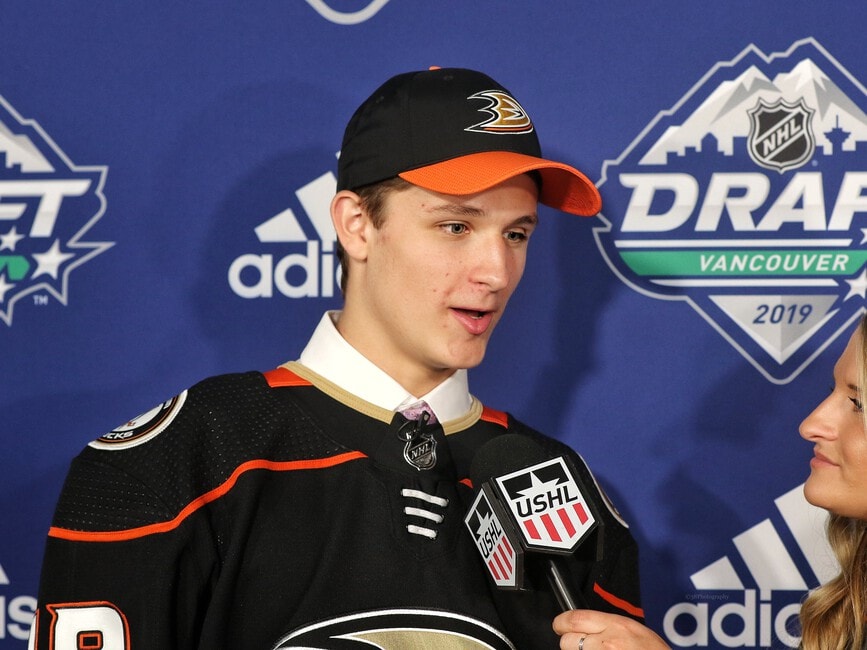 We’re back with a prospect update, and what a week it was for some of the Anaheim Ducks’ prospects! Trevor Zegras earned a call-up to the NHL, and Jamie Drysdale continued his blistering start to professional hockey. Plus, Artyom Galimov is at it again with the highlight-reel plays. It’s time to recap and analyze their performances. Welcome back to our series updating you on some of the Ducks’ top prospects and picks from the NHL Entry Draft.

Zegras Called Up From AHL

It’s been a wild week in San Diego that’s culminated in Zegras being called up to the Ducks. The Gulls went 3-1-0 over the last week, picking up two wins against the Colorado Eagles and one against the Bakersfield Condors. Zegras recorded two goals and one assist, and prior to his recall, was tied for the AHL scoring lead with Seth Jarvis and Tom Novak. Drysdale continued his torrid start to his professional career, recording two goals and two assists to give him sole possession of the AHL scoring lead for defensemen. He has registered a point in five of his eight games played so far.

Jacob Perreault and Benoit-Olivier Groulx both registered their first professional goals in the Gulls 4-3 win over Bakersfield on Feb. 17. Perreault also added an assist to bring his AHL totals to one goal and two assists in seven games played. Vinni Lettieri and Andrew Poturalski led the Gulls offensively this week. Lettieri recorded three goals and two assists, and Poturalski amassed two goals and four assists, including a four-point game in San Diego’s 7-3 victory over Colorado on Feb. 20. Josh Mahura also recorded two assists before being called up to the NHL to replace an injured Hampus Lindholm.

Galimov missed out on Ak Bars Kazan’s Feb. 15 game against Dinamo Riga due to an injury, but returned for their final two games of the week. He earned a promotion to the top line and finished the week with two assists and two shots on goal. Not an overly impressive stat line, but when you check out one of his assists below, you’ll see why the team promoted him to the top line. He now has five goals and 10 assists for 15 points in 38 games played. He earned KHL Goal of the Month for January and just might earn Play of the Month with this assist.

Colangelo returned from a minor upper-body injury that kept him out last week and appeared in both of Northeastern’s games against UMass Lowell this week. He recorded one assist and four shots on goal. That brings his season totals to three assists in seven games played. He’s still searching for his first career NCAA goal.

Axel Andersson featured in both games for Södertälje SK this week, going pointless and recording two shots on goal in the process. His season totals remain the same two goals and eight assists for 10 points in 42 games played.

Albin Sundsvik and Skellefteå AIK had a tough week with the team losing all three of their games and the forward failing to register a point. He played approximately 10 minutes of average time on ice across all three games and registered two shots on goal. Through 37 games played this season, he has five goals and five assists for 10 points.

Rögle had loaned Thimo Nickl to Mora in the HockeyAllsvenskan last week, but he was returned to the team on Feb. 15 and has been practicing but yet to play a game. We’ll keep an eye on this situation, as he didn’t play in many games when he was on Rögle previously.

The University of Minnesota continued their winning ways with back-to-back victories over Michigan State this weekend. That’s eight wins in their last 10 games now, with their only losses coming against Wisconsin. Blake McLaughlin registered an assist and now has 21 points in 24 games played. Jackson LaCombe recorded one goal and one assist across two games played, bringing his season totals to four goals and 12 assists for 16 points in 20 games played. Jack Perbix finished the week with one goal and has three goals and four assists for seven points in 23 games played. McLaughlin also had a highlight-reel goal that was disallowed, as shown below.

Ian Moore seems to have cemented his spot in the lineup for the Chicago Steel, having played in all three games for the team this week. He showed off his impressive offensive ability with a quick burst of speed to lose his man and a beautiful backhander top shelf to give the Steel a 2-1 lead. He now has five goals and five assists for 10 points in 24 games played.

Trevor Janicke broke a pointless skid that saw him fail to record a point in nine of his last 10 games when he registered a goal in Notre Dame’s 6-5 shootout victory over Wisconsin. He also recorded four shots in each of their games last week. He now has two goals and five assists for seven points in 24 games played this season.

Thanks for checking out our latest prospects update of the 2020-21 season. Stay tuned for a fresh update on Ducks prospects from major junior, NCAA, Europe and around the world!

In the meantime, if you want to hear my thoughts on the team’s prospects and current affairs, check out The Forever Mighty Podcast for all the latest Anaheim Ducks talk and analysis.