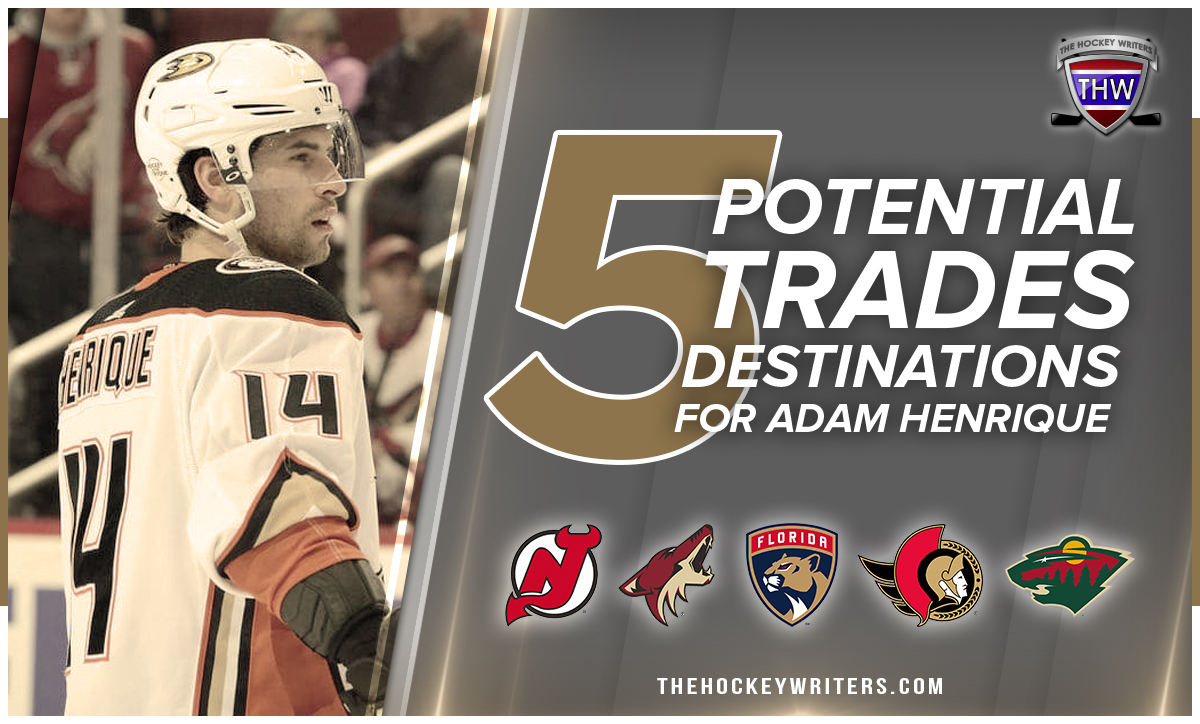 In a bid to shake things up in the locker room, the Anaheim Ducks surprised everyone by waiving veteran forward Adam Henrique last Saturday. He is in the second year of a five-year $29.125 million contract extension with an average annual value of $5.825 million.

Coming off his most productive season in a Ducks’ uniform, where he recorded 26 goals and 17 assists for 43 points in 71 games played, it’s been a struggle for the 31-year old this season with only three goals and one assist in 16 games played. Placing him on waivers seemed to be a last-ditch effort to shed Henrique’s contract and signalled that there were likely no suitors willing to take on his full contract in a trade. Ultimately, he ended up clearing waivers, and now the Ducks’ are presumably forced to retain salary in any trade involving the Brantford, Ontario-native. Another wrinkle involved is Henrique’s modified no-trade clause in which he submits a 10-team no-trade list. Fellow Ducks’ contributor Anthony Ciardelli wrote an article earlier this year on why the Ducks’ should explore a Henrique trade. With all that considered, we’ll now take a look at five potential trade destinations for the Ducks’ forward.

Out of all the teams, I felt would be willing to absorb Henrique’s entire contract off waivers, the New Jersey Devils seemed the most likely. The player has a storied history with the club having been drafted 82nd overall by the franchise in the 2008 NHL Entry Draft. He spent just over six seasons in the NHL with the Devils, amassing 122 goals and 135 assists for 257 points in 455 games played. It would be a familiar face for an organization in the middle of a full-on rebuild. With the introductions of Nico Hischier and Jack Hughes, the Devils have two franchise centers to build around, and with young players like Ty Smith, Alexander Holtz and Dawson Mercer in their system, the future is bright in the Garden State.

The Devils have several high-value contracts coming off the books at the end of this season, with over $22-million being shed in expiring contracts. I’d expect some of those players to be back, including Kyle Palmieri and Travis Zajac, but hitting the cap floor could become a priority for the team if several players don’t return. Henrique’s contract, even retained, gives the Devils’ some cap flexibility for the next three seasons and a player who can jump into the top six and mentor the Devils’ young superstars.

The Ducks have to bite the bullet a bit here and retain $2-million for the next three years of Henrique’s deal. However, they get draft capital in return, adding another third-round pick to their pool, and they get a serviceable young player in 6-foot-3 Russian winger Mikhail Maltsev. It’s the second season in North America for the 22-year old, and he amassed 11 goals and 10 assists in 49 games with the AHL’s Binghamton Devils during the 2019-20 season. Maltsev recorded his first career NHL goal this season in four games with the Devils and currently has one goal in one game in the AHL. At the very least, he’s a solid addition to the San Diego Gulls, who are about to lose Brayden Tracey and Jacob Perreault once the CHL resumes and have already lost Trevor Zegras to promotion.

The Arizona Coyotes have remedied some of their goal-scoring issues from seasons prior. However, despite the impressive production from the likes of Christian Dvorak and Conor Garland, they are still ranked 22nd in goals per game at 2.61. Lawson Crouse currently occupies a spot in the Coyotes top six and has only one assist in 15 games played, while Tyler Pitlick, who operates on the opposite wing, has two goals and three assists in 18 games played. Not exactly the production you want when you’re aiming to make the playoffs in a weak division.

Henrique becomes an immediate upgrade to the Coyotes young core and brings 10 years of NHL experience to a forward group that only has two players over 30 in Derick Brassard and Phil Kessel. The Coyotes are relatively short on NHL caliber defenseman, and Jacob Larsson likely replaces Ilya Lyubushkin, who has only played eight games this season.

On the flip side, the Ducks take on Jason Demers’ $3.937 million contract for the remainder of this season before he becomes an unrestricted free agent. He can take Larsson’s spot on the Ducks’ defense and form a bottom pairing with Ben Hutton or Jani Hakanpaa. They also shed $4.325 million of Henrique’s contract for the next three seasons, which gives them some cap flexibility moving forward.

The prize of this deal, and likely the one thing that Coyotes’ fans are ready to flame me about, is the addition of Jan Jenik. The Czech native is the Coyotes’ third or fourth-best prospect in their system and is currently playing in the AHL for the Tucson Roadrunners. He currently has one goal and four assists in four games played. It’s a piece for the future for the Ducks, and in a similar fashion to Maltsev, a great addition to the San Diego Gulls for their 2020-21 season. Drafted 65th overall in the 2018 NHL Entry Draft, he spent the 2019-20 season in the Ontario Hockey League with the Hamilton Bulldogs amassing 22 goals and 34 assists in 27 games played. The swap of picks adds some value to account for Jenik and gives the Coyotes a third-round pick in a draft, where they currently don’t have one.

The Florida Panthers have been one of the feel-good stories of the season after jumping out to a 12-3-2 start. Aleksander Barkov, Jonathan Huberdeau and Patric Hornqvist have led the way offensively with some surprising totals from the likes of Anthony Duclair and Carter Verhaeghe. There aren’t many glaring weaknesses on this Panthers’ team, however, one area they could improve on is their center depth.

Outside of Barkov, the Panthers have been operating with Alexander Wennberg, Eetu Luostarinen and Juho Lammikko as their remaining centers. Even if Wennberg retains his second-line center spot, alongside Huberdeau and Hornqvist, Henrique steps into the third line as an immediate upgrade on the rookie Luostarinen. He also provides a veteran presence to a playoff-bound team that only has one forward over 30 in Hornqvist. At $1.25-million, retained the Panthers add just over $1-million in salary by acquiring Henrique.

Anaheim sheds $4.575 million of Henrique’s contract, which essentially gets offset by the addition of Brett Connolly’s $3.5 million contract. However, the Ducks do escape the final year of Henrique’s contract with Connolly’s deal expiring a year sooner. Anaheim gets a proven goal-scoring winger who would’ve had back-to-back 20-goal seasons if not for the shortened 2019-20 season. His best season came with the Washington Capitals in the 2018-19 season, where he recorded 22 goals and 24 assists in 81 games played. He had 19 goals for the Panthers in 69 games played last season. The Ducks also get a 2021 4th round pick in this deal due to the offensive consistency Henrique has shown over the last seven seasons in comparison to Connolly. It’s not a deal-breaker but seems to offset the gap in value between the two forwards.

The Ottawa Senators make this list for two reasons; they have a good amount of cap space available, and they are the only Canadian team on this list. That last point is a bit vague, but if Henrique wants to move closer to his hometown of Brantford, then Ottawa is his closest option outside of the Toronto Maple Leafs.

The Senators are running with two young pivots down the middle in Josh Norris and Colin White, but outside of that, the Artem Anisimov experiment hasn’t worked out, and Derek Stepan has struggled with six points through 20 games played. Three years of Henrique playing with a young core consisting of Drake Batherson, Tim Stuetzle, and Brady Tkachuk could be good for a rebuilding Senators team. The ownership group has touted the need for veterans to help show their young kids the way, and Henrique brings a wealth of NHL experience to the fold.

The Ducks offset Henrique’s salary by adding Anisimov for the remainder of the 2020-21 season but escape the remainder of his contract for the next three seasons. Formenton is a nice addition for the Ducks and one that doesn’t hurt the Senators considering, how deep their prospect pool is. At this point, you could argue that Formenton has fallen outside the top ten in the Senators’ prospect pool. He’s coming off an impressive 2019-20 AHL season that saw him record 27 goals and 26 assists in 61 games played. However, while his Belleville line-mates, Norris and Batherson, have solidified their spots in the NHL it’s Formenton who is the odd man out. He currently has one goal in four games played in the AHL this season. He’s a solid addition for a competitive Gulls’ squad and a project the Ducks can take their time with.

This might be a tough get now that Victor Rask has found a home on a line with Matts Zuccarello and Kirill Kaprizov, however, Henrique does prove to be an upgrade on the Swedish center despite his struggles this season. It’s hard to think that his struggles would continue playing with those two wingers in Minnesota. The Wild are up against the cap, hence the Ducks retaining $2-million to offset the difference in Rask’s contract. They have Nick Bonino, Marcus Johansson and Ian Cole coming off the books at the end of this season which will allow them to comfortably have space for the remainder of Henrique’s deal.

Anaheim brings 27-year old Rask into the mix of several other Swedish players on their roster. His contract extends only one year beyond this season, meaning the Ducks get out of the final two years of Henrique’s deal. There is also some hope that Rask rediscovers his form from his time with the Carolina Hurricanes.

Ivan Lodnia isn’t a top prospect in Minnesota’s system, but he has seen notable progression over the last few seasons since being drafted 85th overall in the 2017 NHL Entry Draft and is an interesting project for the Ducks. Not to mention he is a Los Angeles, California-native, so it’s a natural fit. He’s currently on loan in the KHL with Dinamo Minsk and has one goal and six assists in 27 games played.

At the end of the day, Henrique has some control over his potential destination, and all five of these teams could be on his no-trade list. What does seem clear though, is that his days in Anaheim are numbered, and he very well could have played his last game in orange and black. Let me know your thoughts on these deals, and your Henrique trade ideas in the comments below.

In the meantime, if you want to hear my thoughts on the team’s prospects and current affairs, check out The Forever Mighty Podcast for all the latest Anaheim Ducks talk and analysis.