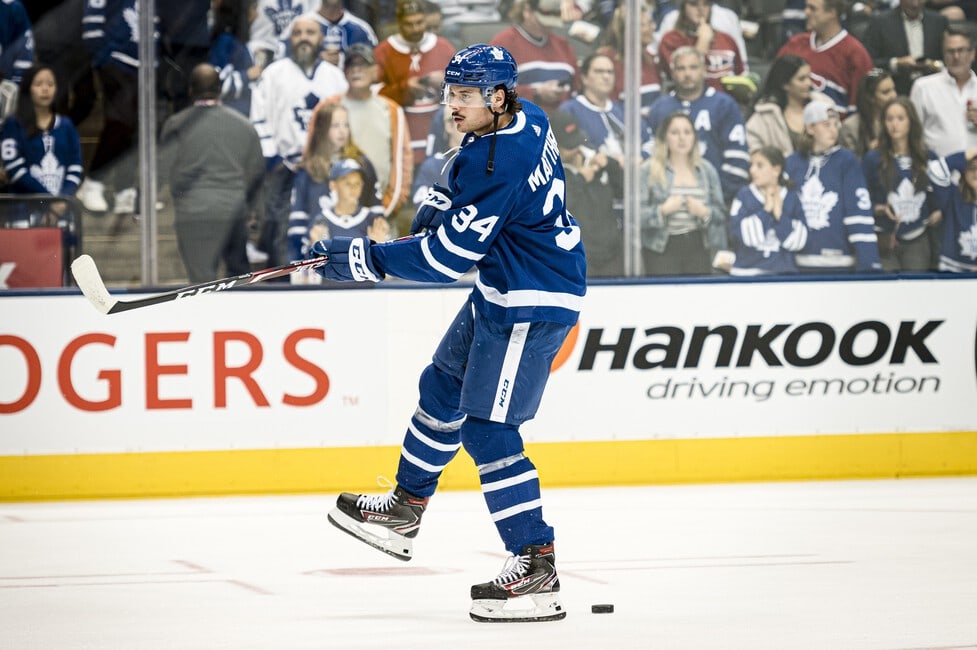 The Toronto Maple Leafs are on a roll. They’ve been led by their two backup goalies Jack Campbell and Michael Hutchinson, who helped the team win back-to-back shutout games over the Edmonton Oilers both on Saturday night’s Hockey Night in Canada and on Monday evening. Furthermore, the team did it with young superstar center Auston Matthews out of the lineup.

After Tuesday’s practice, there was a sense that some of the players who had been injured would soon return to the lineup. That would promise to make the team even stronger into the near future. The Maple Leafs have already shown this season that they are the class of the all-Canadian North Division.

The question was how head coach Sheldon Keefe will decide to play it. If regular starting goalie Frederik Andersen were ready to return, with third-stringer Hutchinson just coming off a tremendous shutout victory against a tough team, would Keefe trust his depth chart or go with the hot goalie? We now know something about Keefe – he’s loyal to his depth chart.

Item One: Auston Matthews Will Play in Wednesday’s Game

Auston Matthews, who had been out with a nagging wrist injury, skated with his regular first-line teammates in Tuesday’s practice. It was reported that he was “hopeful” to play in the third game of the team’s three-game set tonight against the Oilers.

For the first time in some days, Matthews engaged in the team’s practice as a full participant. After the practice, he reported that his progress was solid and reported that “the team believes” he had a chance to play on Wednesday. He was correct.

On Wednesday morning, the Maple Leafs’ training staff evaluated the star center before any final decision was made. The decision, which just came in a short time ago, calls for Matthews to play. However, looking at some of the tweets about Matthews’ progress suggests that, although he might have been a “full participant” during practice, he didn’t seem to be 100 percent. Specifically, as noted below, his shot isn’t back to normal.

In Matthews’ case, obviously the team is much better with him in the lineup. However, his injury did keep him out for two games and, reports of full participation aside, he’s not yet regained his full abilities. From what I’ve read, his shot is less than its usual howitzer. That said, in Tuesday’s practice he was skating in his usual position between his linemates Mitch Marner and Joe Thornton for the first time during the main practice group.

Although Matthews was listed as day-to-day, given what had been reported in practice, I was betting that he’d be especially anxious to return for Wednesday’s game against Connor McDavid. As fans recall, McDavid hung out with Matthews in Arizona during the offseason and worked out under practices led by former NHL great Shane Doan.

Matthews might not be fully recovered, but as noted he’ll play tonight back in his usual spot on the Maple Leafs’ top line and on the first power-play unit after missing two-games. The 23-year-old will be looking to add to his 18 goals and 13 assists (for 31 points) in 18 games this season. Can he keep up his goal-a-game pace?

From yesterday’s reports, Andersen seemed to be healing well from his injury and also seemed to be preparing to start. Given reports from practice, there was a chance he would be in goal on Wednesday night in Edmonton. He engaged in full practice on Tuesday for the second time in two days. This afternoon we learned he’d play tonight.

Because the Maple Leafs have a back-to-back against the Oilers tonight and then head into Vancouver to play the Canucks tomorrow, head coach Keefe could have decided to hold Andersen out another game – just in case. However, yesterday Keefe reported that Andersen had a “positive day” at practice and today the team’s physicians and training staff re-evaluated Andersen’s status and returned with a positive announcement.

Andersen had missed the team’s past four games with a lower-body issue. Before his injury, the 31-year-old goalie had been on a 6-1-1 streak in his last eight games. He’ll likely see lots of games in the near future, and look for Hutchinson to start against the Canucks tomorrow. So far this season, the 31-year-old Dane has a record of 11-3-2, a goals-against-average of 2.69, and a save percentage of .905.

It’s confusing what second-string goalie Jack Campbell’s injury status really is. It seems to keep changing, and that’s really – although confusing – good news. The latest reports are that Campbell took part in the morning skate and could back up Andersen on Wednesday night.

That decision will likely be made just prior to the game. If Campbell can’t dress for the game, Hutchinson will become Andersen’s backup. Clearly, Campbell had been re-injured during Saturday’s shutout victory against the Oilers, and it wasn’t clear when he could return to game action. Although the 29-year-old Campbell was able to practice, it wasn’t in a full capacity.

For now, it looks as if Andersen will return for one of the team’s back-to-backs and that the surprisingly successful Hutchinson will start the other.

During the Maple Leafs last two games they did something the organization hadn’t done in almost 70 years. They had consecutive shutouts against the same team. Back in November 1954 (when I was in grade one, by the way) the Maple Leafs shut out the Detroit Red Wings twice in consecutive games.

Related: Maple Leafs’ Jack Campbell Is a Teammate You Want on the Roster

How good is this Maple Leafs team? We can’t know for certain, but they’re off to the franchise’s best start in history by recording 17 wins in their first 23 games (17-4-2). Even more impressive is the depth that general manager Kyle Dubas has pulled together on the team, especially given what’s been salary-cap issues since both Matthews and Marner signed their big contracts.

In short, the team has overcome a number of injuries and kept on winning. Will I soon see reluctant Toronto fans and sports writers suggesting that Dubas should be considered for the Jim Gregory General Manager of the Year Award this season. Last year’s winner was New York Islanders general manager Lou Lamoriello, of course. Now wouldn’t that be rich?