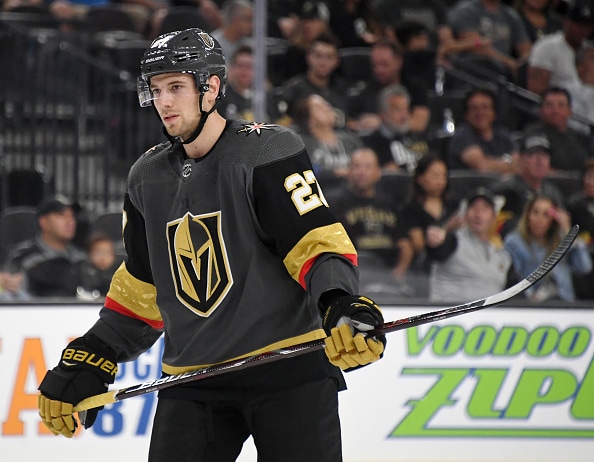 With 17 games in the month of March, the Vegas Golden Knights had their work cut out for them. But, they rose to the challenge of a condensed schedule, playing some of their best hockey of the season while posting a 12-5 record.

As we do every month, here are the three shining stars who led the team throughout the month. Many of them are returning nominees, but that just proves how great and consistent these stars really are.

The greatest compliment I can give Pacioretty for his play this month is this: every team needs a Max Pacioretty. What “Patches” brings to a lineup is consistent, clutch scoring that is essential to a successful hockey club in today’s NHL.

Through March, the Connecticut native posted 20 points in 15 games, split equally between goals and assists. Three of his goals were game-winners, as well as two others that were on the power play, meaning most of his damage is done during 5-on-5 play, something you can’t say about many other elite NHL goal scorers.

The Golden Knights are starting to look like the “winners” of the Suzuki – Tatar – Pacioretty trade that brought the latter to the Nevada desert. Although Tomas Tatar and Nick Suzuki are doing well for the Montreal Canadiens, if Pacioretty keeps putting up these numbers, Vegas will come out the clear winners. If he does it in the playoffs? It will be icing on the cake.

No player on the Golden Knights had a better month than Shea Theodore. He played like the prototypical number one NHL defenseman, carrying the load on the backend while simultaneously creating scoring chances. Alongside Alex Pietrangelo, Theodore proved he can be the best defenseman in the Honda West Division.

He also did damage on the score sheet, posting 15 points in 17 games, averaging 23:17 of ice time per night. This stretch of point production put Theodore third on the team in points, as well as in the plus/minus category at plus-13.

Theodore now finds himself in the top five in the NHL in points among defensemen. If he keeps it up, he will surely surpass the leader, Victor Hedman of the Tampa Bay Lightning, who has 33 points. Stats aside, Theodore is the anchor on the back end, keeping the ship afloat.

Although I really wanted to give Theodore the first star, it was impossible to argue against the franchise’s first captain’s impact during the month of March. Stone was remarkable, and the Golden Knights should consider themselves the luckiest team in the NHL that they snapped him up from the Ottawa Senators before anyone else did.

Stone tallied 23 points in 16 games, as well as a plus-10 rating. Those stats are great, but what really drew my attention was his shooting percentage for the month, which was an outstanding 29.6 percent. Are you kidding me? I knew he was elite, but man, that is impressive. If it wasn’t for Connor McDavid (Edmonton Oilers) and Auston Matthews (Toronto Maple Leafs) enjoying video-game-like seasons, Stone would be a shoo-in for the Hart Trophy.

It’s a shame he doesn’t get the recognition he deserves because he is one of the top-five players in the NHL. Hart Trophy or not, Vegas fans will always save a place in our hearts for what the Brandon, Manitoba native brings to the ice.

Robin Lehner came back from injury this month and played in three games, winning all three. He posted a 1.33 goals-against average and a .939 save percentage, an impressive bounce-back from our beloved Swedish goaltender. Look for him to start more games in April and continue to regain his mojo.

Who do you think the 3 Stars of the Month were? Let me know in the comments below!

Hello Everybody!
Looking forward to working with you all. A passion for all sports (especially hockey) has led me here.I plan on making my mark while working symbiotically with you all to deliver the best possible content on the Vegas Golden Knights.