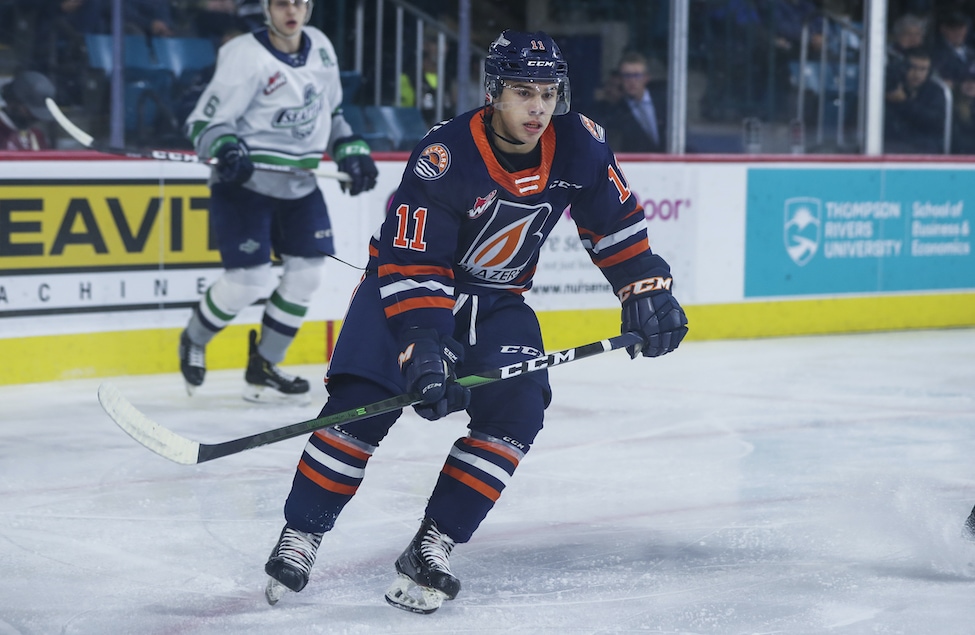 Today’s Prospects News & Rumors column has a bit of an international flair to it. First, we check in on a pair of Russian imports who had big nights in the American Hockey League (AHL). Then, we will make a stop in the Western Hockey League (WHL) to catch up with a potential first-round pick in the 2021 NHL Entry Draft.

It seems like a lifetime ago when the Columbus Blue Jackets selected Tarasov in the third round (86th overall) of the 2017 NHL Entry Draft. After bouncing between all three levels of Russian hockey and one season in Finland’s Liiga, the 22-year-old goaltender finally made his North American debut on Saturday night.

Tarasov made his first AHL start for the Cleveland Monsters and played well in a 4-2 victory over the Grand Rapids Griffins, the Detroit Red Wings farm team. He allowed first-period goals to Riley Barber and Mathias Brome before settling in. He stopped all 20 shots he faced in second and third periods and made 27 saves in all, including twisting and turning to keep the puck from going over the goal line.

“He didn’t get rattled and he settled down,” Monsters’ head coach Mike Eaves said of Tarasov’s night. “Some of his saves when he went side-to-side, he knew the play was coming, anticipated well and stayed square to the shooter. It was a good first impression, for sure.”

Tarasov spent much of this season with Salavat Yulaev Ufa in the Kontinental Hockey League (KHL), where he backed up Juha Metsola. He started 16 regular-season games and posted an 11-3-2 record with a .925 save percentage and a 2.07 goals-against average. He appeared in two relief appearances during the playoffs and stopped all 12 shots he faced.

Sokolov is another young Russian prospect who had a big night on Saturday. Unlike Tarasov, he came over to North American for junior hockey. He had three huge seasons for the Cape Brenton Screaming Eagles in Quebec Major Junior Hockey League (QMJHL). In 184 QMJHL games, he scored 97 goals and 191 points, including 46 goals and 92 points during his draft season of 2019-20.

After being drafted by the Ottawa Senators in the second round (61st overall) of the 2020 NHL Entry Draft, Sokolov turned pro, signed his entry-level contract and reported to the Belleville Senators in the AHL. He came up huge in last night’s 7-2 blowout of the Toronto Marlies by scoring his first professional hat trick.

“The last couple of games were rough and I couldn’t put the puck in the net,” Sokolov said during his postgame media session. “I talked to the coaches today and they all told me not to focus on that, just clear your mind and do your job. They know my potential and what I can do on the ice, shooting the puck. My teammates did a great job passing me the puck and all I had to do was put it in the net.”

Sokolov now has seven goals and 10 points in his first 16 AHL games with Belleville.

Logan Stankoven Wins it in Overtime

We move on to the WHL, where a top-rated prospect who has yet to be drafted had a big night. Stankoven was the hero for the Kamloops Blazers’ 4-3 overtime win over the Victoria Royals in Kelowna, BC.

The 18-year-old forward factored in on all four Blazers’ goals. After picking up a goal and two assists in regulation, Stankoven scored in overtime to improve Kamloop’s record to 4-0-0 to start the shortened WHL season.

In three games, Stankoven has three goals and eight points. He is a bit undersized compared to your traditional NHL player at 5-foot-8 and 174 pounds, but many expect him to be a first-round pick at this July’s NHL Entry Draft.

Two of our draft experts here at The Hockey Writers have Stankoven going in the first round. Mathew Zator has him ranked the highest as he checks in at No. 14 on his latest list. Peter Baracchini has him a bit lower in his latest Top 100 list but still has him as a first-rounder at 28. Andrew Forbes had Stankoven put him in the early second round at No. 36 in his February rankings, but we will see if he moved up when his April list is released.

Content machine and copy editor at THW. Covering the Blackhawks and the AHL Central while providing your Today in Hockey History and Prospects News & Rumors columns. Regional scout/trivia host/podcaster.