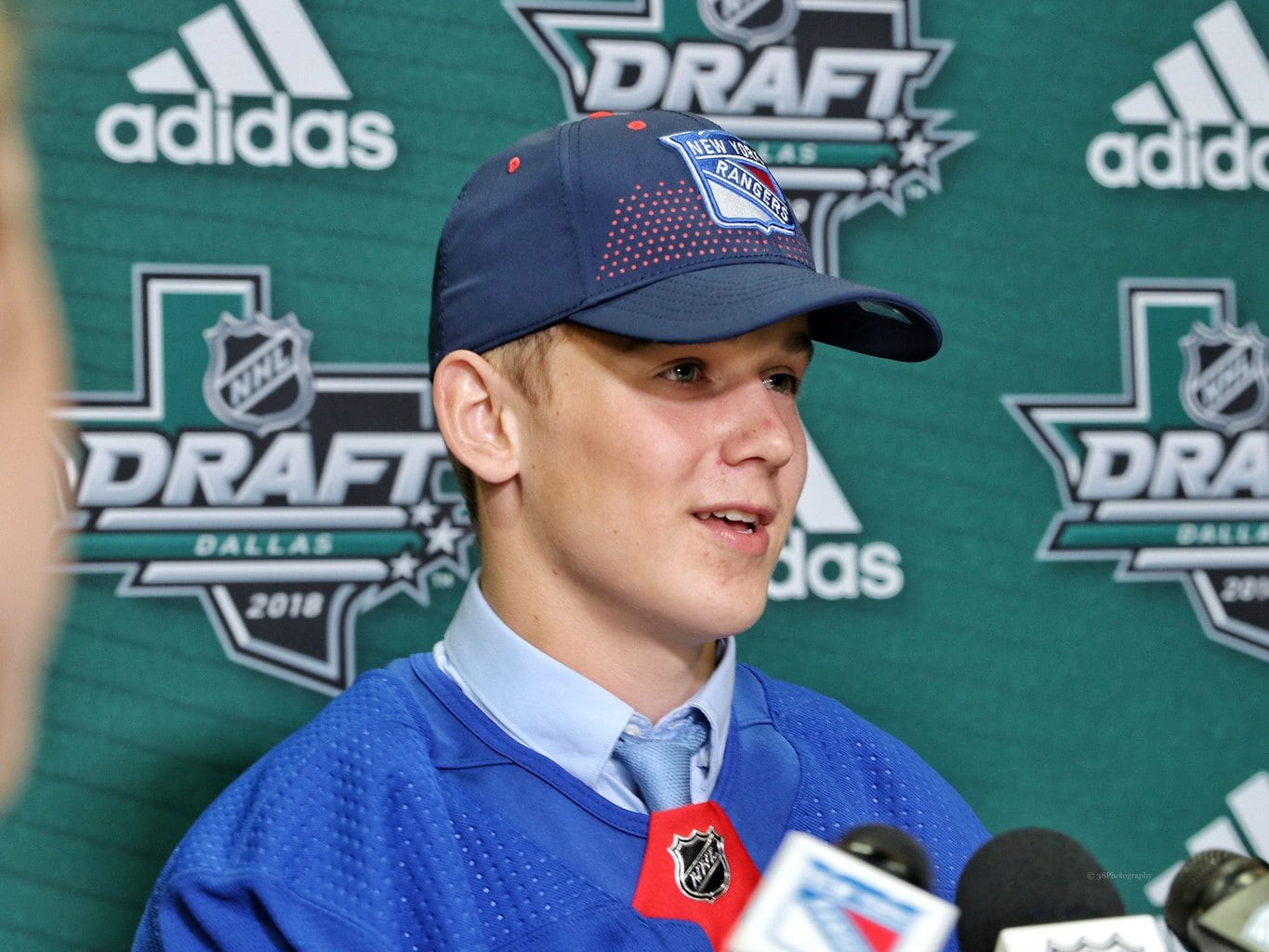 The New York Rangers have a plethora of extremely skilled young players. At the start of their April 6 game against the Pittsburgh Penguins, they had six first-round picks in the lineup who are all under the age of 30. Their pipeline is just as loaded. However, with the addition of Vitali Kravtsov to the Big Apple, there is one prospect who figures to be next in that pipeline – Nils Lundkvist. After Lundkvist, everyone else in bunched up a bit, starting with Lauri Pajuniemi, Zac Jones, Mathew Robertson and Braden Schneider.

Lundkvist, who recently finished his regular season with Lulea of the Swedish Hockey League (SHL), was announced as the Salming Trophy winner as the league’s best defenseman. Lundkvist, who has topped the Rangers’ prospect list for most of the last six months, has brought his level of play up this season and put himself next in line to sign an entry-level deal with the club.

He has the most points for an under-21 defenseman in SHL history. Lundkvist and Lulea will begin their quarterfinal playoff series on April 11. You can bet Rangers’ European scouts and the brass back home will be paying attention to what he does next.

The six-foot, 196-pound right wing from Finland, who was the Rangers’ fifth-round-draft pick in the 2018 NHL Entry Draft, has impressed the organization with his consistency this season. Pujuniemi has had 27 points in his last 37 games while playing for TPS (Liiga), 20 of which were goals.

He’s also recorded eight goals and one assist in his last 11 games. Pujuniemi is tied for fourth in the league in goals and is plus-10 with 35 points in 44 games. Among under-22s in Liiga, Pujuniemi ranks first in goals and second in points over the last two seasons.

Zac Jones, a smallish defenseman from Richmond, VA, will be representing UMass in the NCAA Frozen Four this coming weekend. Jones, the 20-year-old third-round draft pick from 2019, has shined so far with UMass. He has 23 points in 27 games with an impressive plus-16 rating thus far. He’ll surely look to be a factor in the semi-final against Minnesota-Duluth and beyond while the Rangers will be watching closely. Jones has the most assists, points and shots on goal among UMass defensemen.

He’s tied for second in the NCAA lead for goals by defensemen. His coach at UMass has this to say about Jones: “Zac is an NHL player, it’s just a matter of time. … He’s a high, high-end offensive player, he’ll be a similar player to Adam Fox. … His growth without the puck the last two years has been outstanding.” (credit – NHL Network)

Matthew Robertson is a big defenseman playing for the Edmonton Oil Kings of the WHL (Western Hockey League). Robertson has been productive so far this season. He has 12 points in 11 games from the backend with a plus-16 rating.

The 20-year-old, 49th overall pick by the Rangers in the 2019 draft, was the game’s second star on April 2 against Red Deer. During that game, he had four points with three assists which are both single-game career highs during his WHL tenure.

Braden Schneider, the Rangers first-round, 19th overall, 2020 draft pick, signed an entry-level contract last month. Schneider, a 6-foot-2, 200-pound defenseman is tied for the team lead in plus/minus. He’s third and seventh among defensemen in the WHL, for goals and points respectively. He was also named team captain for this season.

An Abundance of Riches

Even with Vitali Kravtsov no longer being called a prospect, the Rangers have several more ready to step in and join the Russian forward. Some will be doing it sooner than later. With the young talent that’s already on the roster, the only problem is finding a place for them and the one’s on their way up.

Scott Blair is an author and journalist from Los Angeles, Ca by way of Detroit, Mi.  Scott’s life has been shaped by uniquely diverse experiences in both of those places he calls home.  He is now traveling the world learning and growing as a human and a writer.  He was a professional hockey player and then turned to the arts becoming an actor for about 15 years.  His passions turned to poetry, prose, politics, and journalism when he got tired of the Hollywood machine and what it represents.