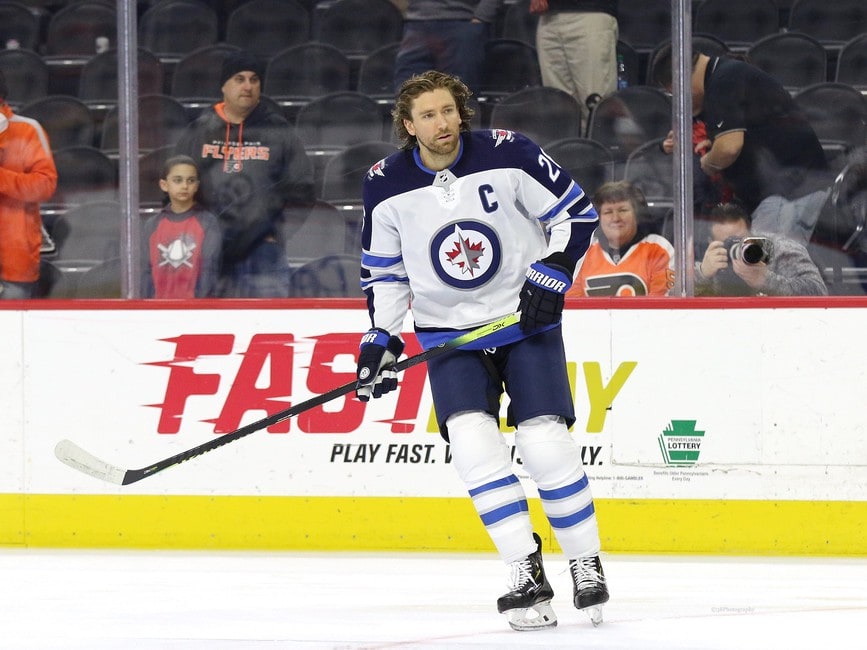 Winnipeg Jets captain Blake Wheeler will not be making the team’s five-game road trip that begins on April 8 in Montreal with a battle against the Canadiens. The team has not released what the actual injury is, but it is with speculation that they are treating it as a concussion.

The winger has only missed a total of six games since the relocation from Atlanta back in 2011. A five-game road trip where Wheeler will not be present will definitely create a hole in the lineup that needs to be filled. It is assumed that Andrew Copp will slide onto the second line.

This article takes a look at who will step up in his absence and what the team needs to do to be successful without their captain.

The line of Scheifele, Nikolaj Ehlers, and Kyle Connor have to create offence like they never have before. The absence of Wheeler from the second line is going to leave a hole there that is very tough to fill, so ultimately, the Jets’ first line needs to make up the offence that is missing.

I have no doubt in my mind that they can do this, as Ehlers said that he is going to start taking a more shoot-first mentality. This will allow Connor or Scheifele to potentially feed him the puck in stride to get a great scoring chance off. Last game against the Ottawa Senators, the line scored the game-winning goal off the stick of Connor, and head coach Paul Maurice will be looking to this line more and more often in the next few games.

The Jets will not only be missing Wheeler’s skill but also his leadership in the locker room. Scheifele is one of the candidates that needs to step up on the ice and in the locker room. Whether it is giving a speech in the room or leading by example on the ice, he will be looked at to make a difference on the road trip.

It is no surprise that Wheeler is the biggest part of the Jets’ great first power play with his position down below the goal line. He is the step man for Scheifele on the side, Paul Stastny in the middle, and Connor on the far side for the one-timer. So who is going to take his spot down there on the number one power play?

Personally, I would love to see Ehlers get a shot on the top unit, but I do believe that it will be Copp who gets the nod. I picture Stastny moving down to Wheeler’s spot and Copp popping up to the middle to replace Stastny. This will give Stastny the opportunity to showcase his playmaking ability and hockey IQ.

Doing what Wheeler does on the power play is very hard to replicate, but the Jets do not have to do that. The best move for the power play would be to get it over to Scheifele, and he can decide if he wants to give it to Josh Morrissey on the point, Copp in the middle, or across the ice to Connor for the one-timer. Scheifele is going to be the key part of this Jets power play for the next five games.

It is no question that Copp is having a career year. He has 30 points so far this season, with his previous high being 28 in an 82-game season, and he has the opportunity to make it even more memorable. Speculation is Copp will slot in on the second line with Stastny and Pierre-Luc Dubois. This will place the two-way forward with a playmaker and a power forward, giving them the ability to be a great shutdown line.

What does Copp have to do to be successful on this line? I believe that it all starts with playing the exact same way that he has played so far this season. He is going to get the ice time no matter what, due to his play on the number one penalty kill and potentially slotting in on the top power play.

As Copp looks to continue his career year, he will also have to not focus on getting points just because he is up in the lineup. The Jets will always be able to score, but it is their ability to defend where they have struggled. Copp replacing Wheeler on that line makes it a better line defensively, and they could be used against the other teams top two lines more than ever.

With Wheeler out of the lineup, how much do you guys think it will impact the team? Do you think that one player needs to step up more than others? Do you agree with Copp being placed on the second line? Let me know in the comments!

Hello my name is Isaiah Wagner and I am from Winnipeg. I am currently a Winnipeg Jets writer for The Hockey Writers. I am very excited to share my passion about hockey and the Jets with you!