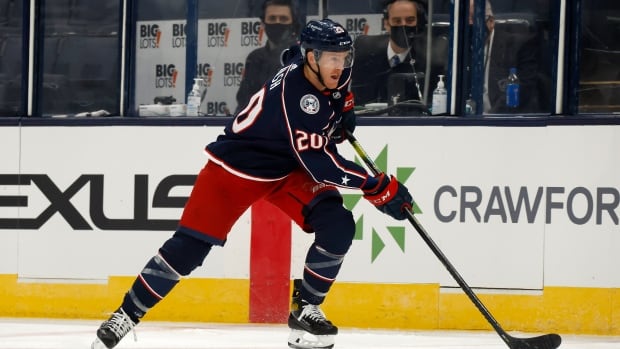 Maple Leafs general manager Kyle Dubas has added some depth to his forward group ahead of the NHL’s trade deadline.

Toronto acquired centre Riley Nash from the Columbus Blue Jackets on Friday for a conditional seventh-round selection in the 2022 draft.

The 31-year-old, who’s set to become an unrestricted free agent, has appeared in 37 games this season, registering a pair of goals and five assists.

Nash has 63 goals and 172 points in 578 regular-season games with Blue Jackets, Carolina Hurricanes and Boston Bruins. Originally selected 21st overall by the Edmonton Oilers in 2007, the Consort, Alta., native has two goals and six assists in 32 playoff games.

The NHL trade deadline is set for 3 p.m. ET on Monday.

Nash was placed on long-term injured reserve Tuesday with a lower-body ailment that’s expected to keep him out of action up to six weeks.

The seventh-round selection heading to Columbus will become a sixth rounder if Nash appears in 25 per cent of Toronto’s playoff games in 2021.

The six-foot-two, 188-pound forward is in the final season of a three-year contract that carries an annual average value of $2.75 million US.

The Colorado Avalanche reacquired Patrik Nemeth, trading a fourth-round pick to the Detroit Red Wings for the veteran defenceman.

The 6-foot-3, 228-pound Nemeth was big presence in front of the net when he was in Colorado, leading the team in blocked shots with 185 in 2017-18. He joins a young but talented blue line that includes Samuel Girard, Cale Makar and Bowen Byram, who was added Friday to the list of players unavailable due to COVID-19 protocols.

Colorado is currently without veteran defenceman Erik Johnson. He’s been limited to four games this season due to a lower-body injury.

Nemeth appeared in 13 post-season games while in Colorado. He led the team in average ice time and hits during the 2018 Stanley Cup playoffs.

The 29-year-old Nemeth had two goals and six assists this season for Detroit. The eight points were third among Red Wings defencemen.