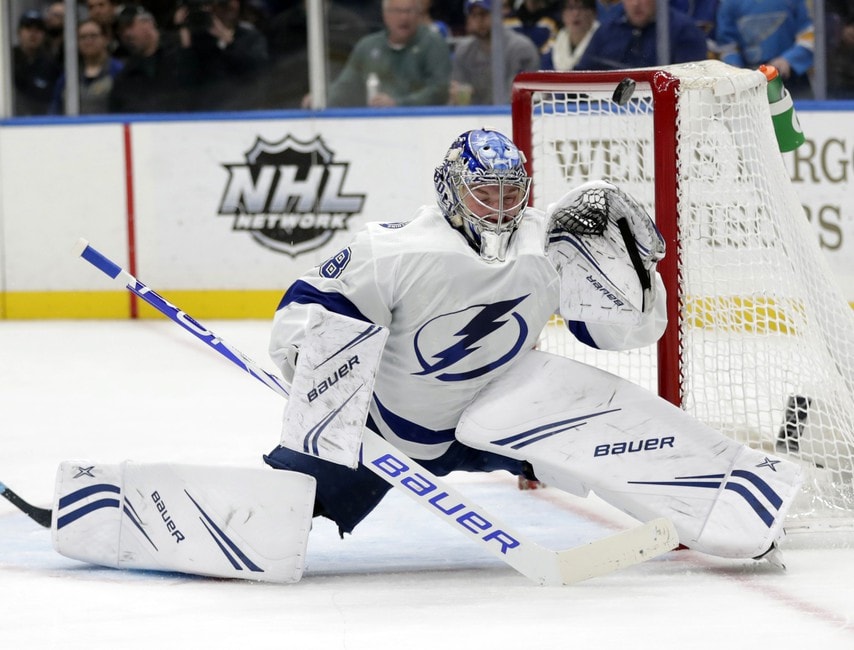 Each season, the Hart Memorial Trophy is awarded “to the player adjudged to be the most valuable to his team.” The Professional Hockey Writers’ Association selects the winner based on a poll at the end of the regular season. Based on this definition, Andrei Vasilevskiy should be a Hart Trophy finalist.

Vasilevskiy has been incredibly dominant in net and is a fundamental reason why the Tampa Bay Lightning have remained near the top of the league standings throughout the season. In this article, I will cover the precedent of Hart Trophy-winning goaltenders and explain why Vasilevskiy should be a finalist for the trophy this season.

It is a rare occurrence for a goaltender to win the Hart Trophy. In fact, the award has been won by a goaltender just eight times by seven different goaltenders since it was first awarded after the 1923-24 season. Dominik Hasek is the only goaltender to win it twice, doing so in the 1996-97 and the 1997-98 seasons.

Five of the eight winners also won the Vezina Trophy, awarded to the league’s best goaltender in the same season. However, it is important to note that from the 1946-47 to 1981-82 seasons, the award was given to the goaltender who played the most games on the team that allowed the fewest goals throughout the season.

Carey Price is the most recent Hart Trophy-winning goaltender for his dominant display during the 2014-15 season. He posted an impressive 44 wins, a .933 save percentage (SV%), a 1.96 goals against average (GAA), and nine shutouts.

Price was the first backstop to win the Hart Trophy, Vezina Trophy, and Ted Lindsay Award, awarded to the player voted most outstanding by his peers, in a single season since Hasek did it in 1998. Furthermore, Price won the William M. Jennings Trophy, given to the goaltender with the fewest goals scored against in the regular season. He is the only goaltender to win all four of the aforementioned trophies in a single season.

There is an argument among hockey circles about whether the use of traditional or advanced statistics is superior when analyzing the performance of hockey players. For the sake of comprehensiveness, I decided to include both. The traditional statistics for goaltenders include wins, SV%, and GAA.

In 32 games played this season, Vasilevskiy has a record of 25-6-1 and four shutouts. He is tied with Philipp Grubauer for the league lead in wins. However, Grubauer has played two additional games. Earlier in the season, Vasilevskiy got on a remarkable win streak, winning 12 straight starts from Feb. 22 to March 25. He is the first goaltender to have three win streaks of 10 games or more in their career, and he has recorded such a win streak in three consecutive seasons.

Among goaltenders who have played in at least 10 games, Vasilevskiy leads the league with a SV% of .932. His 2.00 GAA is tied for second in the league. Jack Campbell and Alex Nedeljkovic have a slightly better GAA, 1.98, but have only played in 12 and 15 games, respectively. For comparison, Price had 44 wins, a .933 SV%, and a 1.96 GAA in his Hart Trophy season. If Vasilevskiy were to maintain his current level of play, it is likely that he could have matched those numbers in a full-length season.

Another way to assess a goaltender’s performance is by looking at their goals saved above average (GSAA) and goals saved above expected (GSAx). GSAA is the lesser of the two, but it can still be a good statistic to analyze nonetheless. It essentially compares how many goals a goaltender allowed compared to the amount an average goalie in the league would have allowed if shot totals were equal. According to Evolving-Hockey, Vasilevskiy leads the league with a GSAA of 20.58. He is trailed by Juuse Saros and Chris Driedger, who have a GSAA of 14.12 and 12.65, respectively.

Arguably the best statistic to assess goaltenders with is GSAx, which reflects how many goals were saved by the goaltender above what was expected. This statistic is better because it also takes into account the quality of shots the backstop faced. Vasilevskiy leads the league among goaltenders in this category, too. According to Evolving-Hockey, he has a GSAx of 18.7, ahead of Marc-Andre Fleury (14.41), and Connor Hellebuyck (13.59). Price had a ridiculously high GSAx of 38.88 when he won the Hart Trophy, a testament to the fact that goaltenders must have an extraordinarily miraculous season to be considered the league’s most valuable player.

A Cut Above the Rest

It is important to note that statistics don’t tell the whole story. Vasilevskiy’s statistics make him the outright favorite for the Vezina Trophy, but what makes him worthy of the Hart Trophy? Anyone who has watched a Lightning game this season would tell you that they wouldn’t be near the top of the league without the “Big Cat.” I think Lightning color analyst Brian Engblom described Vasilevskiy’s season best when he said,

“He’s an A-plus for the season…He makes the exceptional saves, but he also makes the really timely saves. And he’s also become a very calm goaltender. He’s the epitome of the team. He’s patient. He’s a big moment guy. And you need a big-moment goaltender.”

-from ‘Lightning midseason thoughts: Andrei Vasilevskiy for league MVP, most improved player and more’ by Joe Smith, The Athletic, March 19, 2021

It is often said that wins aren’t a goalie stat, and they aren’t, but the Lightning would have significantly fewer wins without the phenomenal play of Vasilevskiy. It is quite obvious that the confidence he gained from winning the Stanley Cup has spilled over into the 2020-21 season.

It is hard to compare the play of skaters to goalies; it is not apples to apples, and the voting for the award is subjective. This season, the favorites for the Hart Trophy have included Connor McDavid, Leon Draisaitl, Auston Matthews, and Patrick Kane, among others. Six of the last nine Hart Trophy winners led the league in scoring, so it is hard to imagine voters will look to a goaltender to win this season. However, the trophy is supposed to go to the player who is most valuable to his team, and without Vasilevskiy, the Lightning would likely struggle to secure a playoff spot. He has been not only the best goaltender in the league, but he has also been instrumental to the Lightning’s success this season, and he deserves to be a Hart Trophy finalist.

Andrew is a freelance writer who covers the Tampa Bay Lightning at The Hockey Writers. He is a passionate hockey fan who grew up near Tampa, Florida. He is a father to a Golden Retriever and is studying to be a Physician Assistant.