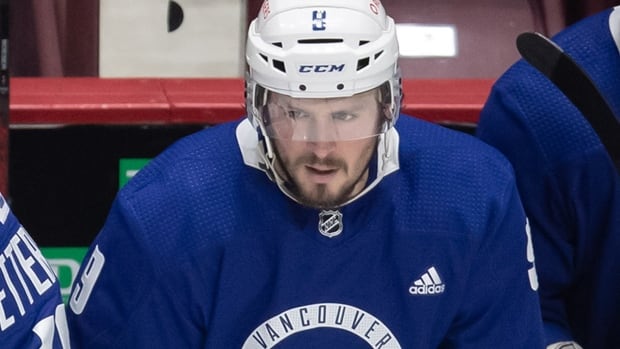 At a time of year when making the playoffs is usually his priority, J.T. Miller finds himself more concerned about the health and safety of his Vancouver Canuck teammates.

Miller is one of the few Canucks lucky enough to avoid falling ill to a COVID-19 variant that has crippled the team and forced the postponement of seven games. With the number of infections dropping, the Canucks are scheduled to return to play with home games Friday against the Edmonton Oilers and Saturday against the Toronto Maple Leafs. That begins a slate of 19 games in 30 days ending May 16.

“It’s kind of frustrating for me,” Miller told a teleconference Wednesday. “We try to talk about the No. 1 priority being the players’ health and their families’ safety. It’s almost impossible to achieve that with what they have asked us to do here on our return.

“To come back and play is going to be very challenging and not very safe, it you’re me. I’m sure there are other people who would agree with that.”

Twenty-five members of the Vancouver Canucks organization have tested positive for a COVID-19 variant and it has put the remainder of the team’s season in question. 1:55

Making the playoffs was already going to be difficult for Vancouver even before the virus spread through the Canuck dressing room. Knowing the health issues players are facing has put things in perspective for Miller.

“To think about the playoffs, when guys are still recovering from this and are expected to be ready to play, it’s frustrating,” he said. “I just want to make sure everybody’s priorities are in the right place.

“This doesn’t have to do with me not wanting to play or not believing in my team. It’s an extreme scenario and dangerous to a lot of our players. I want to make sure our priorities are in the right spot.”

Heading into Wednesday night the Canucks were 10 points out of the final playoff spot in the North Division.

“It’s a crazy schedule when everyone is healthy,” said forward Tanner Pearson, who also avoided contracting the virus but has been sidelined since March 17 with an injury. “Who knows how guys are going to react when they come back.”

“I’m hoping we can win our share of games here so we can make it competitive going down the stretch,” he said. “At some point we might get some young guys in the lineup.”

Head coach Travis Green is one of the 22 players and four coaches made sick by the virus. His status is unclear.

“He is feeling better every day,” Benning said earlier this week. “Hopefully he is ready to go when we get back.”

As of Wednesday, the Canucks had seven players remaining on the NHL COVID protocol list.

Dr. Brian Conway, the medical director of the Vancouver Infectious Diseases Centre, said it can take a minimum of two weeks for a person to recover from COVID. This can extend to over four weeks for people with more serious cases and if they have suffered an inflammation of the lungs or brain symptoms.

“If you’re an elite athlete . . . you’re away from the rink for two weeks and now you’re back to your usual state of health, how much practice time and what do you need to get back into your normal, athletic competitive self?” he said.

The Canucks last played March 24. Forward Adam Gaudette was the first Canuck to test positive for COVID on March 30. He was traded to Chicago on Monday.

Conway also has concerns about the Canuck schedule.

“If I was being a cautious doctor, and a doctor that’s advocating for my patients, I would say at most you’re going to be able to play in half of those games, because you’re basically not going to have the endurance to do all of those games,” he said.

Players who had significant cases of the virus should only play every third day. Anyone feeling any reoccurrence of symptoms should be pulled from the lineup.

Miller said he has skated a couple times over the last few weeks.

“My lungs are screaming and I’m definitely not in game shape,” he said. “I can’t image what these guys [who were sick] are going to have to go through.

“I never thought I would be in this scenario. It’s not ideal for anybody. We have a job to do, I guess.”