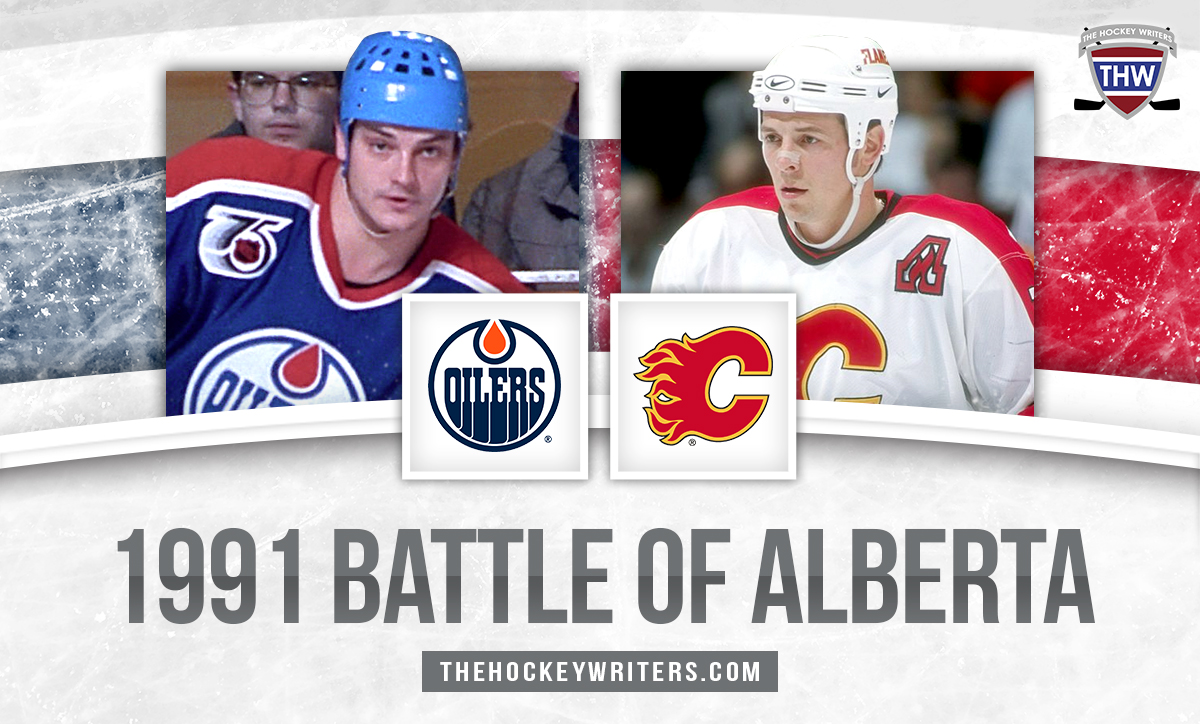 Inevitably, any situation that allows Calgary and Edmonton to compare themselves to the other, the Battle of Alberta materializes.

Often it’s friendly. Like when the cities compete to raise more money for a charitable cause. On other occasions, it’s heated. Like when teams representing the cities meet on the field, the court, or the ice. Especially on the ice.

One of the National Hockey League’s famous rivalries, the Calgary Flames vs. the Edmonton Oilers is always hyped like a championship fight and never fails to rile both fanbases, even when the games are largely inconsequential — which has commonly been the case for quite some time now.

“I think that was probably one of the greatest seven-game series ever played in the history of professional hockey. It was an incredibly intense series. It was almost barbaric, at points. I would say it was one of those last of those old-school series.”

Theo Fleury (From “End of an era: A look-back at the Calgary Flames’ most fond memories at Rexall Place in Edmonton”, The Calgary Herald, 04/01/06)

Believe it or not, three decades have passed since the last postseason Battle of Alberta. The Oilers and Flames met in the 1991 Smythe Division semi-final and delivered an instant classic whose legacy has been authenticated with time. The series includes an iconic victory in the history of each franchise, and the best two words in sports plus one more: Game 7 overtime.

From April 4 to 16, 1991, it held rapt an entire province. On its 30th anniversary, here’s a look back at that legendary Battle of Alberta.

The Flames and Oilers had previously faced off in a postseason series four times; most famously in 1986 when Calgary knocked off two-time reigning champs after Edmonton’s Steve Smith scored on his own goal in the third period of Game 7, most recently in 1988 when Edmonton swept Calgary on its way to Stanley Cup No. 4.

When the Alberta rivals met in spring 1991, between them they represented the past four Stanley Cup winners (Calgary in 1989; Edmonton in 1987, 1988, and 1990) and the last eight Campbell Conference representatives in the final (Edmonton six times, the Flames twice). Their rosters each included four future Hall-of-Famers: Calgary’s Doug Gilmour, Al MacInnis, Sergei Makarov, and Joe Nieuwendyk; and Oilers Glenn Anderson, Grant Fuhr, Kevin Lowe and Mark Messier.

Calgary had finished second in the Smythe Division, 20 points ahead of the third-place Oilers. The Flames held a 4-3-1 edge over Edmonton in the regular-season series, though the Oilers went 3-1-1 in their last five meetings of the 1990-91 schedule.

In the final days of the regular season, Edmonton and Calgary gave a preview of their Smythe Division Semifinal, playing each other home-and-home on consecutive nights, with both games going to overtime, a 4-4 tie in Calgary and a 6-5 home win for the Oilers.

Starting With a Split

The series got underway at Calgary’s Olympic Saddledome, where the Oilers opened their Stanley Cup defense with an efficient 3-1 win. Petr Klima scored the game-winning goal midway through the second period and Fuhr made 27 saves for the Oilers, who snatched home advantage from the Flames.

Desperate to salvage a split from the first two games on their home ice, the Flames bounced back, flipping the script for a 3-1 win in Game 2. Gary Suter scored in the first period, giving Calgary an early lead that it would never relinquish. Flames netminder Mike Vernon was the star of the game, stopping 35 of 36 shots as Calgary leveled the series.

The scene shifted to Northlands Coliseum, where Edmonton looked to hold serve after stealing home advantage from its southern foes. The Flames led on three separate occasions in Game 3, but the hosts had an answer each time, and Joe Murphy scored to break a 3-3 tie with just 14 seconds left, giving Edmonton the win and leaving the Flames stunned.

Calgary came out strong once again in Game 4, building a 2-0 first-period lead, before the Oilers scored five unanswered goals, including three in less than five minutes spanning the second and third periods. Fuhr made 29 saves in a 5-2 victory that put the Oilers ahead 3-1 with the series heading back to Calgary.

Game 5 followed an eerily similar script for the Flames, who jumped out to a 2-0 lead in the first period only to watch the Oilers storm back and tie the game up. This time, however, the Flames would have an answer, scoring two quick goals in the second period. Calgary went on to win 5-3, staying alive for at least one more game.

After a 51-goal regular season for the Flames, Theo Fleury had yet to score in the series as the puck dropped at Northlands for Game 6. The Prairie-bred pitbull was still searching for a goal at the end of regulation.

Sixty minutes had solved nothing between the provincial rivals. Craig Simpson gave Edmonton a 1-0 lead in the first period, Paul Ranheim tied things up for Calgary midway through the second, and no one scored in the third.

The Oilers began the night needing only to take care of business on home ice to eliminate Calgary. Now they headed into sudden death, one shot from the Smythe Division Final.

But overtime would be neither a good time nor a long time for the Northlands faithful, who had barely settled back into their seats for the extra session before Fleury sent them heading to the exits.

Less than five minutes into the extra session, the 22-year-old winger intercepted a careless pass by Messier at the center ice circle and took off towards the Oilers net. Edmonton’s last man back, Adam Graves, was helpless to catch Fleury, who slipped the puck between Fuhr’s pads at 4:40 of sudden death. The goal was memorable, but it’s the moments after that will never be forgotten.

In what has become one of hockey’s most indelible images, a jubilant Fleury slid across the Northlands ice on his knees, pumping his fists wildly, until he ran into the boards at the other end of the ice and ended up on his back as teammates finally caught up to celebrate with him.

It’s become one of hockey’s most indelible images, simultaneously earning Fleury eternal scorn in one city while lionizing him in another.

A Fine Finnish For the Oilers

Game 7 was all of 16 minutes old, and Fleury had just scored to put Calgary up 3-0. The Saddledome was going bonkers. Edmonton coach John Muckler called timeout.

The Oilers knew well about comebacks from a 3-1 deficit in the opening round of the playoffs. Two years earlier, they had blown just such a lead and lost in the Smythe Division semi-final 4-3 to the Los Angeles Kings. Then in 1990, they had reeled off three straight wins to eliminate the Winnipeg Jets in seven games and advance to the division final.

Now it looked as if they were about to be part of a 3-1 comeback in the first round for a third consecutive year. And they would have been, if not for the player that got under the skin of Calgarians as much as Fleury got on Oilers fans’ nerves.

Esa Tikkanen had spent the timeout exhorting his teammates at the bench. Then the veteran Finn promptly went out and scored on the next shift, making the score 3-1 heading to the first intermission.

Picking right up in the second period, Tikkanen fired a blast that Anderson redirected past Vernon at 4:57 to cut Calgary’s lead to one. Five minutes later, Tikkanen scored again, and it was a brand new game, 3-3.

Edmonton actually took the lead, on Anatoli Semenov’s goal 4:38 into the third period, and was just 2:10 from victory when Calgary’s Ron Stern scored, sending the crowd into a frenzy and the game into a fourth period, deadlocked at 4-4.

Overtime wasn’t so much an athletic contest as it was a back-alley brawl. Space was impossible to come by, so when he got the puck in the Flames zone, Tikkanen circled back at center ice. Picking up speed, the Oilers winger accelerated away from the checking Gilmour, hit the Flames’ blue line, darted left to avoid MacInnis, and wristed the puck past Vernon at 6:58.

While his teammates hopped the boards to mob Tikkanen, Messier hobbled off the bench through the gate, pain etched all over the Oilers captain’s face: This is what winning the Battle of Alberta looked like.

After his Game 7 hat trick, Tikkanen finished with series highs of seven goals and 10 points. Calgary was led by Fleury and Suter with seven points each over the seven games.

Edmonton would go on to beat the Los Angeles Kings 4-2 in the Smythe Division Final, before dropping the Campbell Conference Championship to the Minnesota North Stars in five games. The Pittsburgh Penguins then beat Minnesota in the final to win their franchise’s first championship and officially end Lord Stanley’s four-year residency in Alberta.

At the time no one could have imagined that so much time would elapse without the Flames and Oilers crossing paths again in the spring. Expansion is part to blame: the NHL has grown by half over the last thirty years, while the number of playoff berths is unchanged. Since 1991, the Oilers and Flames have only reached the post-season in the same year thrice, including 2020 when the field was expanded for one time only.

They almost renewed acquaintances in 2006. Leading the Anaheim Mighty Ducks 3-2 in the Western Conference quarterfinal, Calgary was one victory away from advancing to face Edmonton in the next round, but the Flames lost two straight and were eliminated from the post-season.

With a one-off format that features division-only opponents through the first two rounds of the playoffs, 2021 was thought to be the year that could finally produce another post-season Battle of Alberta. That seems highly unlikely now; while Edmonton is solidly in a playoff position, Calgary is well back of the Montreal Canadiens for the last spot, however, a recent surge by the Flames has kept their hopes alive as this season enters the home stretch.

But whether it’s this year, 2022, or another three decades from now, whenever it does happen, the next Battle of Alberta will have a hard time topping 1991.

Brian is an Edmonton-based sports writer and broadcaster. His experience includes working as a sports reporter for the Edmonton Sun, where he covered the Edmonton Oil Kings 2013-14 Memorial Cup championship season.