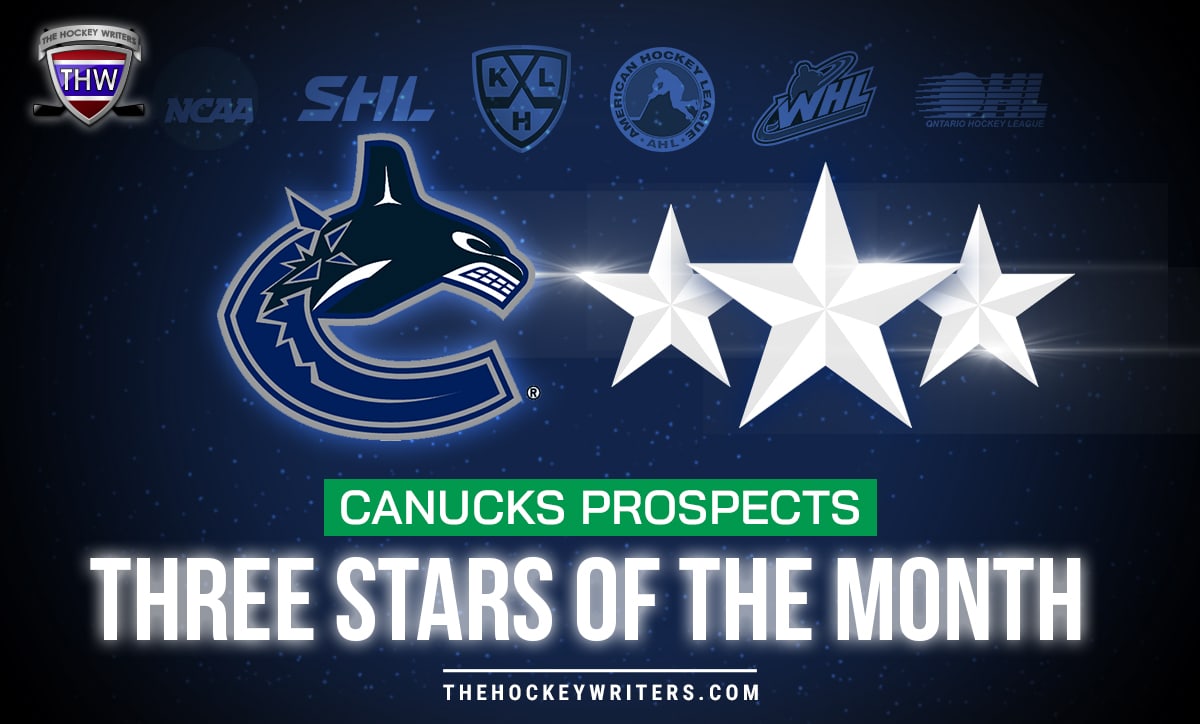 The usual suspects were at it again for the prospects of the Vancouver Canucks, as many of the same names that were seen in March continued their hot play in April. This month saw the return of the Utica Comets, so that meant the return of Jonah Gadjovich and company as well. As you will soon see, it didn’t take long for him to hit the ground running after the COVID break.

So with the playoffs underway in the USHL and overseas, and the AHL closing in on the end of their shortened season, let’s take a look at some of the best performances from the month of April.

After being left off the three stars list in March, Jackson Kunz returns to the podium after a 12-point performance that saw him score four goals and assist on eight others. With those points, he finished his first full season in the USHL with 23 goals and 43 points in 50 games. Surprisingly, only one of those goals was scored on the power play, where he plays the role of a screen most of the time. That means he scored 22 even-strength goals, which is impressive considering a lot of goal scorers get a majority of them with the man advantage (from ‘The Daily Skate: Top players in portal begin to thin out’, Grand Forks Herald, 4/20/21).

Unfortunately, Kunz’s season is now over after back-to-back losses to the Muskegon Lumberjacks on the weekend. He wasn’t a factor in both games, as he was held to only two shots on goal. With his first full USHL season in the books, he will get ready to join the University of North Dakota and hopefully continue the legacy that former prospects Brock Boeser and Troy Stecher left when they won an NCAA Championship in 2016. With a higher level of competition on the horizon, we will see if he can overcome his skating deficiencies and dominate the NCAA in the same way he dominated the USHL.

Linus Karlsson’s production this season has been off the charts. Playing for BIK Karlskoga in the HockeyAllsvenskan, he trailed only Henrik Bjorklund in points with 51 in 52 games and then continued his strong play in the playoffs with eight goals and 15 points in 11 games. Unfortunately, despite his best efforts, which included a hat trick and four points in Game 7 against IF Björklöven, his team still fell 8-5 and was ultimately eliminated.

After his best season since 2018, where he put up 52 points in 42 games for Karlskrona HK J20 in the J20 SuperElit, Karlsson is reportedly off to the SHL to continue his career. The former 2018 third-round pick of the San Jose Sharks appears to be ready for at least the AHL but doesn’t look too interested in moving to North America at this point. Hopefully, he does eventually come over or the Canucks will have nothing left to show for both the Alex Burrows and Jannik Hansen trades they executed at the 2017 Trade Deadline.

Gadjovich may have had fewer points than both the second and third stars of the month, but his stats in the goal column definitely made up for it. Before his well-deserved call up to the Canucks on Saturday, he had 15 goals in 19 games for the Comets and seven of those came in the month of April. He is coming off a Gordie Howe hat trick on Friday and just before that, he had a two-goal outing where he also fired eight shots on goal.

Gadjovich’s breakout performance in the AHL this season has opened a lot of eyes, and despite the fact that the quality of competition is lower this year, there’s no denying how dominant he has been. His skating has improved, he’s a massive net-front presence and his consistency has been off the charts. The longest he has gone without a goal is three games, and that has only happened once.

It’s going to interesting to see how Gadjovich attacks the NHL now that the expectations are higher for the Whitby native. If he’s put in a position to succeed on the power play and five-on-five, expect to see a powerful man on the boards and a handful in front of the net. Oh, yes, and a bull that is not afraid of forging a path to it.

Who Will Be the Three Stars of May?

Without the playoffs this year, the Comets will see their season come to an end on May 16 against the Rochester Americans. Regardless, there are still two weeks where we could see the likes of Carson Focht, William Lockwood, or Jett Woo light it up enough to get on the podium. Vasily Podkolzin will also be in action at the World Championships on the 21st, so we may see him take a run at it too. Until then, enjoy the games, and we will see you next month!

Which Canucks prospect do you think will be part of the three stars next month? Let us know in the comments below!

My name is Matthew and I cover the Vancouver Canucks, and Vancouver Giants here at the Hockey Writers. I am also the head of the prospects and NHL Draft coverage. In addition to writing, I host the Canucks & Pucks podcast as well. I am passionate about the Canucks, prospects, and all things hockey.