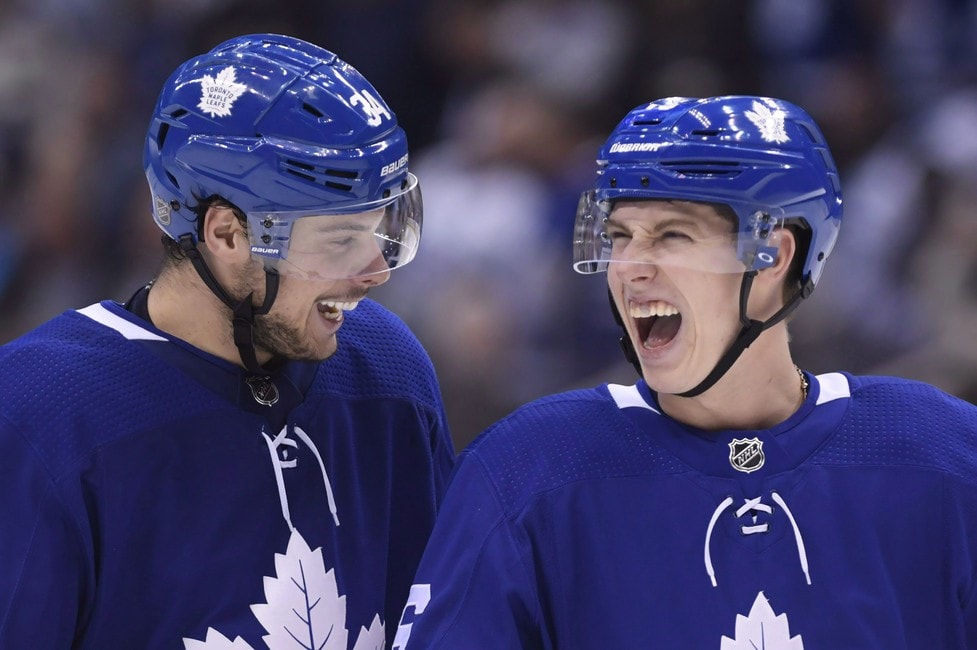 From the very beginning, hockey people knew that the Toronto Maple Leafs’ Mitch Marner was a great young player who had a chance to be a star in the NHL. He was fast; he had great defensive instincts for a young player; and, his overall skill level was over the moon. From the moment he showed up in a Maple Leafs’ uniform, he didn’t disappoint.

Related: Should the Maple Leafs Trade Mitch Marner? Not Even for Sidney Crosby

In his rookie season of 2016-17, with a young team that had finished 29-42-11 the season prior, he scored 61 points to help the Maple Leafs move upwards to a 40-27-15 record and a playoff spot. Neither he nor the team have stopped improving since.

In the 2018-19 season, which was the last season of Marner’s entry-level contract, for the first time in his career he bested the point-a-game pace with 26 goals and 68 assists (for 94 points) in 82 games. Since that season, he’s averaged more than a point-a-game and now has totalled 358 points in 355 NHL games.

It would seem odd now should Marner fall below that mark. No question: he’s a great young hockey player.

Prior to his current contract negotiations with the team between the 2018-19 season and the 2019-20 season, Marner was beloved by Maple Leafs’ fans. As one writer expressed it, he was a “bubbly, exuberant, kid-like personality. To many, he was living our wildest dreams: playing in the NHL for the team he grew up loving. He is the type of talent that makes your eyes widen when he picks up the puck, who does things the viewer (and most opponents) never could have anticipated, usually with great success.”

Much of that feeling went away during and after his contract negotiations with the Maple Leafs’ organization. During those negotiations, one writer described that: “Things got ugly quickly. The Marner camp litigated their case through the media, attempting to put pressure on Dubas and company to get a deal done on their terms. Fans were shocked to hear the Marner camp was actively conspiring with other NHL teams to source offer sheets that would tie the Leafs’ hands.”

Things got so bad that one year later, prior to the start of the 2020-21 season, a number of articles were written about Marner. Many were less that complimentary. One was titled “Should the Leafs Ditch Marner?” and another “The One Trade the Toronto Maple Leafs Need to Make.” The player that article pointed to was Marner.

Feelings about Marner and his value to the team had changed. Over the course of the 2019-20 season, although Marner produced on the score sheet, he had transformed from being a well-loved member of the Maple Leafs’ roster into what many fans saw as a greedy, threatening, self-focused youngster who was willing to hold his team hostage for personal financial gain.

I admit I was among those who believed the tactics Marner’s camp utilized were wrong and would have long-lasting consequences. Obviously, the contract negotiations were successful: Marner’s agent helped him wrestle a healthy (for Marner) contract out of the Maple Leafs, which is part of an agent’s job. Marner currently sits at a $10.903 million salary-cap hit.

Related: Marner to Maple Leafs – ‘Switzerland Is Beautiful in September’

However, as the writer above noted, the tactics Marner’s camp used included posturing, threatening, and spilling media sound-bites. I know from responses to my posts that Maple Leafs’ fans were less than happy. Marner’s reputation suffered. In a hockey market that can be notoriously tough on players who fall from grace, many fans found an easy target in Marner. And, if he were paying attention, Marner likely learned that the fans’ adoration wasn’t unconditional.

When Things Started to Transform Back to “Normal”

Fortunately, I believe that, as we end the 2020-21 season, the public’s mood about Marner has undergone another transformation. For a number of reasons, fans in my small world (reading other Maple Leafs’ writers and what fans have written in the comment section of my own posts), fans have stopped sharing vitriol about Marner.

Related: Canadiens’ Retired Jerseys – the Story of a Famed Franchise

Maybe it was simple as time passing and the memories of the protracted and public negotiations fading; however, I believe other reasons also went into the mix and were part of the context of that positive change.

Reason #1: The Maple Leafs Were Successful

First, it helped that fans felt so good about this season’s team. That positive feeling began when Kyle Dubas constructed the team during the offseason and grew further as the team experienced on-ice success. In my three seasons covering the Maple Leafs, the general feeling about this particular team was more positive than I’d ever seen. It didn’t hurt Marner’s image that the team was winning and that he was a big part of it.

Reason #2: The Maple Leafs’ Brought Marner Back to the Public

Second, between the end of the 2019-20 season and the start of the 2020-21 season, I believe the Maple Leafs’ organization recognized the potential problem and found ways to bring Marner back into the public’s eye in positive ways. First, Marner announced the team’s number one draft choice with Morgan Rielly on the night of the 2020 NHL Entry Draft.

Then the team nominated Marner for the King Clancy, an award presented to the NHL player who “best exemplifies leadership qualities on and off the ice and has made a noteworthy humanitarian contribution to his community.” That didn’t hurt either. I’m not saying that Marner wasn’t worthy of the nomination, just that it helped his image.

Then Maple Leafs’ general manager Dubas, who’d gone more than a few contract rounds with the Marner camp only a few months prior, was effusive about Marner’s contribution to the team.

Dubas noted: “What I’ve seen from Mitch has been, especially since the lockdown started, a great ability for him to continue take more and more ownership of his career (my italics – note, could this be Dubas working to separate Marner’s actions from his agent’s?).

Dubas went on about Marner, “He’s always got that gregarious and infectious way about him that brings great energy to the rink — and now you’re starting to see that go from a boyish sort of energy and enthusiasm to really mature.” (from “Marner’s growth recognized by Dubas, and as Leafs nominee for King Clancy Trophy, Terry Koshan, Toronto Sun, 27/07/20).

When the 2020-21 season started, head coach Sheldon Keefe created a first line of friends Auston Matthews and Marner. It worked well in several ways. Matthews went on an amazing Rocket Richard Trophy run, with Marner regularly assisting him. The combination proved to be magic and started to offer fans a picture of what life would be like for the Maple Leafs for seasons to come.

Marner absolutely did his part to fuel those visions, but the success of that first-line combination for this season and also into the future created visions forward toward possibility rather than backward toward problem.

To his credit, the old Marner emerged. He not only played well but he was proactively joyous. In that, Marner “wrote” some of his own good news. For example, one iconic video of Marner congratulating goalie Jack Campbell after his record-tying game by counting out all 10 of the record-tying wins became a meme. Marner’s bubbly personality was on display and he was more present on videos being asked to weigh in about the team and offering positive spins on his teammates.

As I review the 2020-21 regular season, even given the context of a hockey season played with the backstory of a pandemic, the Maple Leafs had their best season in a long time. The team won its first division title since 2000. Fans were able to see and root for a number of someday-soon hockey hall of fame players such as Joe Thornton and Jason Spezza.

Problems that had haunted the team had been solved and the porous team defense was replaced. Huge injury issues in goal had been overcome by an upstart career backup, and Campbell set an NHL record for consecutive wins. It was a good year for Maple Leafs’ fans.

However, in the bigger picture, bringing Mitch Marner home to his fans after a year-long absence could be one of the most important changes in the organization as it moves towards its future.

The Old Prof (Jim Parsons, Sr.) taught for more than 40 years in the Faculty of Education at the University of Alberta. He’s a Canadian boy, who has two degrees from the University of Kentucky and a doctorate from the University of Texas. He is now retired on Vancouver Island, where he lives with his family. His hobbies include playing with his hockey cards and simply being a sports fan – hockey, the Toronto Raptors, and CFL football (thinks Ricky Ray personifies how a professional athlete should act).

If you wonder why he doesn’t use his real name, it’s because his son – who’s also Jim Parsons – wrote for The Hockey Writers first and asked Jim Sr. to use another name so readers wouldn’t confuse their work.

Because Jim Sr. had worked in China, he adopted the Mandarin word for teacher (老師). The first character lǎo (老) means “old,” and the second character shī (師) means “teacher.” The literal translation of lǎoshī is “old teacher.” That became his pen name. Today, other than writing for The Hockey Writers, he teaches graduate students research design at several Canadian universities.

He looks forward to sharing his insights about the Toronto Maple Leafs and about how sports engages life more fully. His Twitter address is https://twitter.com/TheOldProf