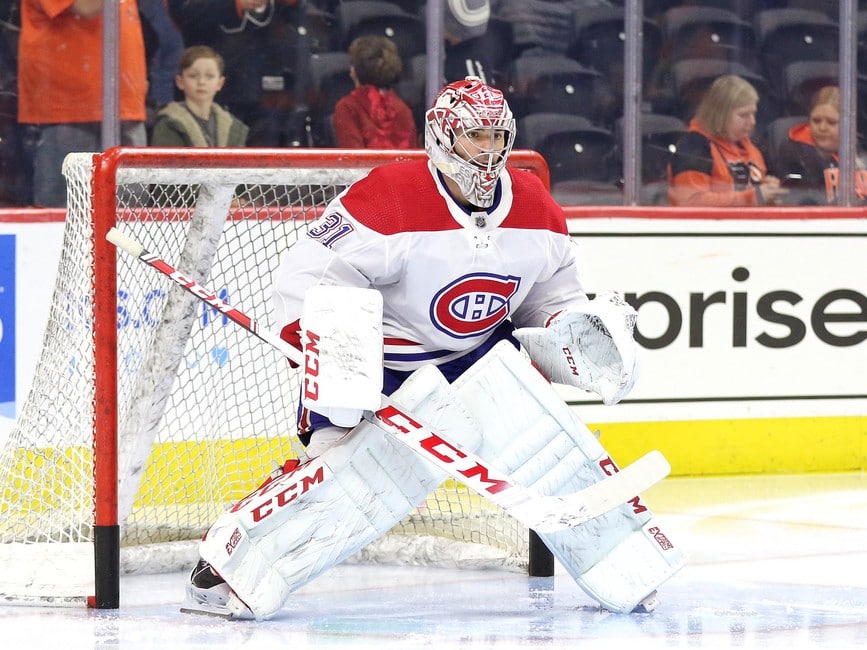 In today’s NHL news and rumors rundown, the Montreal Canadiens have sent both Carey Price and Brendan Gallagher to the AHL. Meanwhile, news has surfaced that former Blue Jackets head coach John Tortorella tried to quit prior to this season. Could the Calgary Flames have the assets to trade for Jack Eichel and who will play in net for the Washington Capitals in Game 2?

Price and Gallagher Assigned to AHL

According to a report by Sporsnet both Price and Gallagher have been assigned to the club’s AHL affiliate in Laval on a long-term injury conditioning stint. The idea is to get them ready for Game 1 of the team’s playoff series that starts on Thursday versus the Toronto Maple Leafs.

While there is a slight concern that either or both players are opening themselves up to a possible injury ahead of Game 1, the Canadiens would rather they get some game action in before the series starts and try to get up to game speed since both have been out of the lineup for a while.

Related: Canadiens’ Gallagher Explains Who They Are as a Team Right Now [Video]

Capitals Don’t Know Who Backup Will Be

While the Capitals did get some good news, they’re also not sure exactly who they’ll be running with in net to back up Craig Anderson. NBC Sports Washington is reporting that both Evgeny Kuznetsov and Ilya Samsonov returned to the ice yesterday for the Capitals optional practice. This means both should be inserted into the lineup soon after being on the COVID-19 protocol list since May 4.

That said, it’s not clear if Samsonov would be an option for Game 2 or if Vitek Vanecek — who suffered a lower-body injury in Game 1 — will be able to return. Right now, Vanecek is being ruled out as day-to-day. Kuznetsov, meanwhile, could be several days away from rejoining the lineup.

While money and a conversation with Nick Foligno ultimately convinced him to stick around for one more season, reports are that former Blue Jackets head coach John Tortorella actually tried to step down as the coach last season. Aaron Portzline of The Athletic is reporting:

The Athletic confirmed this week, however, that Tortorella tried to step down last offseason after the Blue Jackets were bounced from the bubble in Toronto following a qualifying-round win over Toronto and a first-round playoff loss to Tampa Bay. The veteran coach was reading the room and reading the tea leaves, realizing the direction of the club was heading was nothing close to what he thought they were building just two years earlier.

Portzline notes that the Blue Jackets refused to fire him and because Tortorella wanted his $2.5 million salary, taking a lesser role on the team for much less money wasn’t really an option. Also, Foligno had asked Tortorella to stick it out for one more year and Portzline wrote that the emotional nature of that conversation got him to change his mind.

In discussing what the Sabres might be looking for in any trade that would send Eichel to another team, John Vogl of The Athletic writes:

Buffalo needs a true cornerstone to help fans weather the loss of the captain. It’d also be nice to get a center and goalie since the Sabres lack the latter and will need the former once Eichel is gone.

Vogl took a look at some trade proposals and offered up some idea of the return the Sabres could get from team like Calgary, Tampa Bay, Los Angeles, Minnesota Arizona or Detroit. When it came to the Flames, he suggested they would send right winger Matthew Tkachuk, center prospect Connor Zary and a first-round pick to the Sabres in exchange for Eichel.

Noting that a deal would help in the short and long term, Tkachuk could be the new face of the Sabres franchise and add a physical fearlessness that Buffalo lacks.

Jim Parsons is a freelance writer who covers the Edmonton Oilers and news and rumors posts here at The Hockey Writers.

You can also catch him writing at NHLtradetalk.com, The Sportster and hosting weekly video casts, THW News and Rumors Rundown, plus Oilers Overtime.