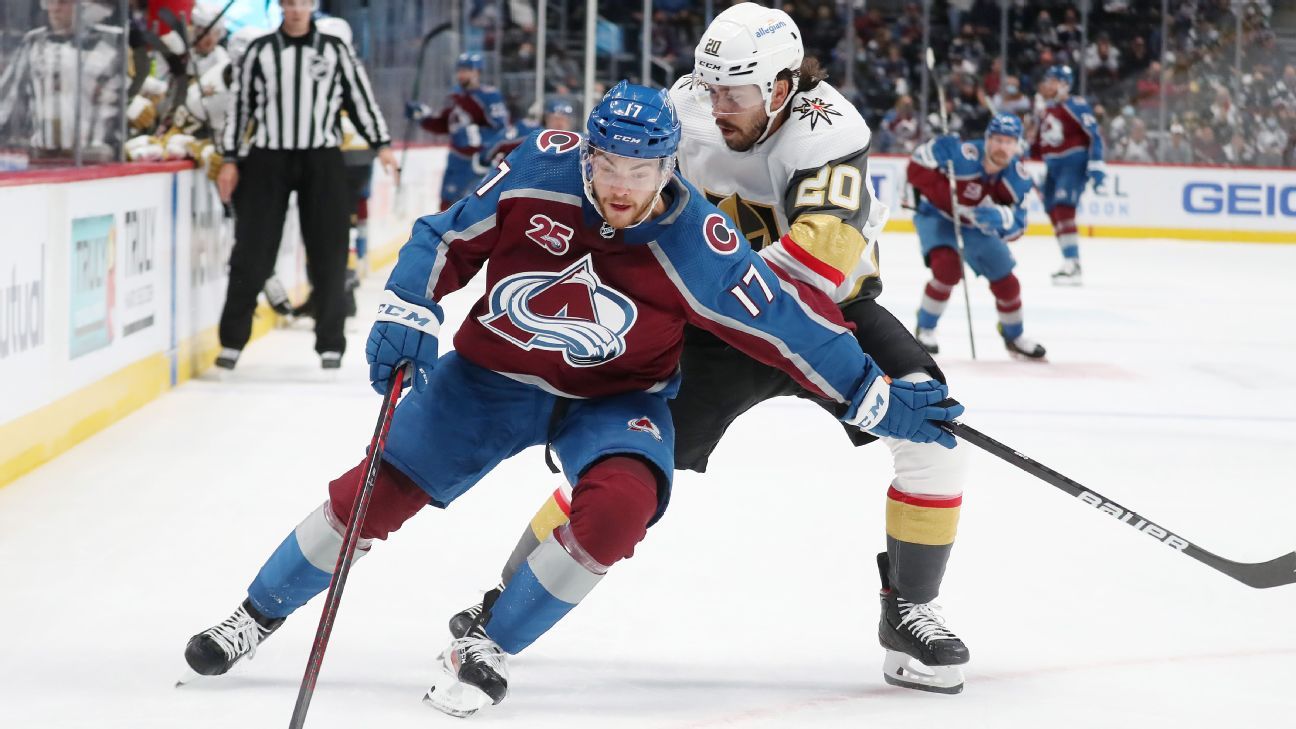 DENVER — After coughing up a 2-0, third-period lead at home, the Colorado Avalanche are on the brink of elimination.

Vegas Golden Knights captain Mark Stone scored 10 seconds into overtime of Game 5 on Tuesday, and the Knights now take a 3-2 series lead back home. Game 6 is Thursday, the first of two must-win games if the Avalanche are to keep their season alive.

Historically, when a best-of-seven series is tied at two games apiece, the winner of Game 5 wins out 78.8% of the time.

“We don’t have much time to do much but rebound,” Colorado captain Gabriel Landeskog said. “We have to go into Vegas and play hockey; it’s as simple as that.”

It has been an inconsistent series for the Presidents’ Trophy-winning Avs, with coach Jared Bednar calling out the team’s effort after Game 3.

“We were cooking in Game 1, we started out great in Game 2 and then it got hard,” Bednar said. “Vegas started playing their game. It’s not the regular season. It’s not the Blues, for that matter. It’s Vegas. Our game needed to be dialed up to a point where you need to win against Vegas. We weren’t there.”

Bednar was much happier with the team’s performance in Game 4, despite losing 5-1. And on Tuesday, Bednar was once again pleased with his team’s effort.

“I’d say, I loved the way we played. I loved it,” Bednar said. “We are the aggressors, we were on our toes, we were playing to win the hockey game, we played to our identity. Even in the third period, I had no problems with it. Except for the turnovers. I didn’t think we had a lot of turnovers tonight, but we had three that I know led to goals against.”

Trailing 2-0 entering the third, the Golden Knights got on the board when Alex Tuch scored 1:03 into the period, taking advantage of an Andre Burakovsky turnover. Jonathan Marchessault scored just three minutes later, capitalizing off of an errant Avs pass in their own offensive zone.

Vegas has proved to be a tough place to play for visiting teams — especially now that the Knights have welcomed back their full capacity of over 18,000 fans. The Avs split the regular-season series in Vegas but lost Games 3 and 4 of this series in front of a full crowd.

Bednar’s message to his team heading into the hostile environment: “Go do it again and eliminate a couple of those plays.”

“I told them that’s exactly how you have to play in order to win against Vegas,” Bednar said. “And you have to do it again.”

Before Tuesday, the Avalanche hadn’t lost a game at home since March 27, a 13-game win streak that spanned the regular season and playoffs.

Bednar made some significant adjustments to his lineup in Game 5. After his star top line of Landeskog, Nathan MacKinnon and Mikko Rantanen dried up offensively — they combined for six goals in the first two games of the series, then just one over the next two — the coach mixed things up.

Brandon Saad replaced Landeskog on the top line, and the new combination paid immediate dividends, with Saad scoring with 0.8 seconds remaining in the first period to give the Avs a 1-0 lead. At 5-on-5, the new top line had a 3-1 edge in high danger chances and 66 expected goals for percentage.

The new second line, featuring Landeskog, J.T. Compher and Valeri Nichushkin, was equally strong at even strength, with a 5-1 edge in high danger chances and 87 expected goals for percentage.

“I don’t care if it’s home or the road, and I don’t know if our guys do, either,” Bednar said. “There’s no reason we can’t get the job done in Vegas.”