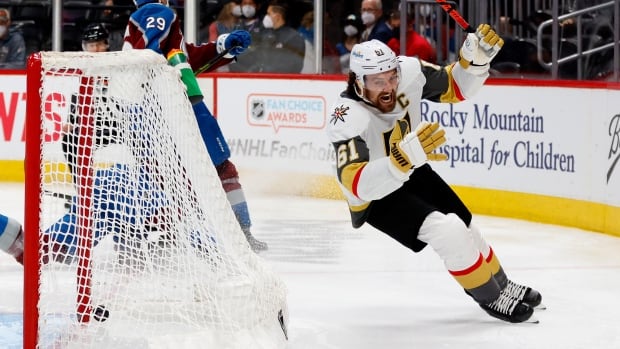 Mark Stone scored on a breakaway 50 seconds into overtime as the Vegas Golden Knights overcame a two-goal deficit to beat the Colorado Avalanche 3-2 on Tuesday night and take a 3-2 lead in their second-round series.

Max Pacioretty corralled the puck after a blocked shot and fed it to Stone, who was off to the races. Stone beat Philipp Grubauer on the glove side to hush what had been a boisterous crowd.

“That was vintage Mark Stone,” Vegas coach Pete DeBoer said. “Big-time play to win it for us.”

Trailing 2-0 entering the third, the Golden Knights found another gear with Alex Tuch scoring 1:03 into the period and Jonathan Marchessault tying it up just 3:04 later.

Mark Stone scores on a breakaway and lifts Vegas to a 3-2 overtime victory over Colorado. Golden Knights take a 3-2 series lead and are one win away from advancing to the Stanley Cup semifinals. 1:41

Really, though, it was the Marc-Andre Fleury Show, with the Vegas goaltender stopping 28 shots, many of the sensational variety. He stuffed J.T. Compher just 10 seconds into the extra period.

“Fleury makes a big stop there. It happened bang, bang,” captain Gabriel Landeskog said. “He’s able to get a piece of it. It didn’t go our way tonight.”

Fleury picked up playoff win No. 88, which ties him with Billy Smith and Ed Belfour for the fourth-most in NHL history. It was also Fleury’s 12th career playoff overtime win, which trails only Tuukka Rask (15) and Braden Holtby (14) for most among active goaltenders, according to NHL Stats.

“He’s a Vezina candidate for a reason,” Stone said of Fleury, who’s up for the league’s top goaltender award. “He’s the Vezina winner in my opinion for a reason and he stayed strong throughout the whole game.”

Colorado appeared in command after a 2-0 lead courtesy of Brandon Saad late in the first and another from Joonas Donskoi in the second. The Avalanche couldn’t make it stand as their 13-game home winning streak was snapped. It’s a string that dated to March 27 — an overtime loss to Vegas.

The Golden Knights are in the driver’s seat, with the winner of Game 5 going on to take the series 78.8 per cent of the time when a best-of-seven series is tied at two games.

Game 6 is Thursday at Vegas.

“The biggest cliche in the playoffs is the toughest game to win is the fourth one,” Stone said. “We’re gonna have to regroup and get ready for that one.”

It was another big performance from Marchessault. He had a hat trick in Game 4.

Before the game, Avalanche coach Jared Bednar switched up his lines in an effort to generate more energy and production. He paired Saad, Nathan MacKinnon and Mikko Rantanen on the top line, while moving Landeskog to the second unit.

It worked, with Saad scoring with 1.8 seconds left in the first period on a shot that appeared to cross up Fleury. Saad has now scored in seven of Colorado’s nine postseason games.

Donskoi made it 2-0 late in the second on a pinpoint pass from rookie Alex Newhook, who was reinserted into the lineup after sitting out the last two games.

“We don’t have much time to do anything but rebound — forget about this one and move,” Landeskog said. “We’ve got to go into Vegas and win a hockey game. It’s as simple as that.”