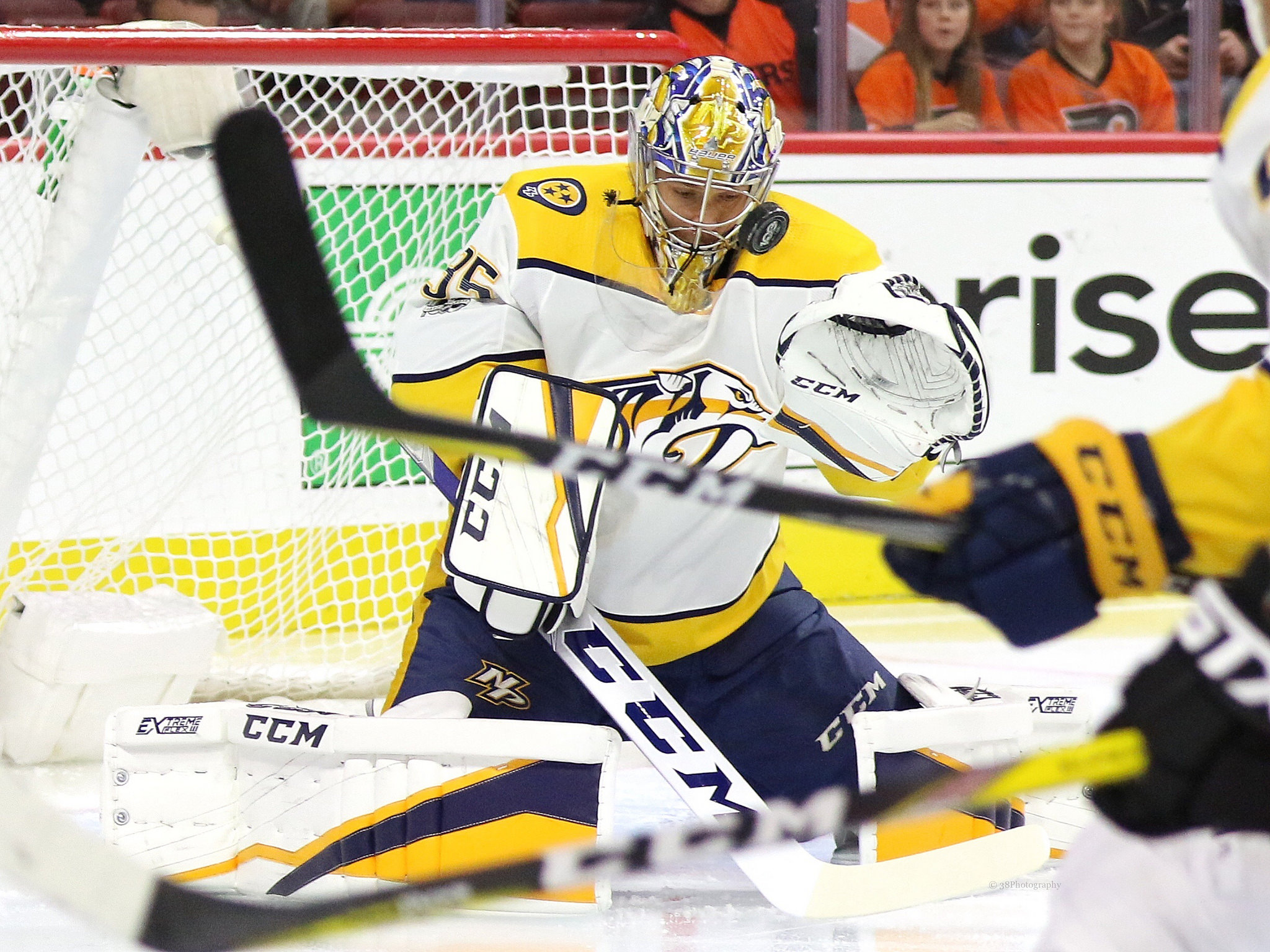 Every NHL organization has a franchise player that becomes a legend for the club. A player that encompasses everything the team stands for. He is elite on the ice and a role model off of it. For the Nashville Predators, that player is none other than goaltender Pekka Rinne.

On Friday, June 4 it was announced that Rinne was a finalist for the King Clancy Trophy, which goes “to the player who best exemplifies leadership qualities on and off the ice.” This is Rinne’s first time appearing as a finalist for the award. He is up against New Jersey Devils defenseman (and past teammate) P.K. Subban and Kurtis Gabriel of the San Jose Sharks. Throughout his career, Rinne has worked with multiple charities including one he co-founded years ago with a former Nashville captain.

During the 2013-14 season, Rinne, along with former teammate Shea Weber, began the 365 Pediatric Cancer Fund. During Predators home games, there are two suites that are reserved for guests from the Monroe Carrell Jr. Children’s Hospital at Vanderbilt and their families. During their visit to Bridgestone Arena, the guests can also partake in locker room meet and greets with the players.

Throughout the season, the Predators will do fundraisers and the players will do yearly hospital visits. Both Weber and Rinne understood that they both “were in a unique situation where we could help, and were thankful to brighten up the lives of kids going through some of their toughest days.”Since its inception, the 365 Pediatric Cancer Fund had donated more than $3 million dollars towards cancer research.

Other Ventures and Charities

The 365 Pediatric Cancer Fund is not the only charity that Rinne works with in Nashville. The Finnish goaltender is also involved in the Best Buddies Program, Make-A-Wish Foundation, and Feed the Frontline initiative which was introduced during the COVID-19 pandemic to help healthcare workers and support the local restaurant industry.

Rinne first became involved with the Best Buddies Program after hearing about it from then-coach Barry Trotz. The Best Buddies Program is an organization dedicated to ending the social, physical and economic isolation of the 200 million people around the globe with intellectual and developmental disabilities. In February 2018, Rinne, along with teammate Roman Josi, took part in the “Best Buddies Prom”, which was held at Bridgestone Arena. Around 2,000 people attended the event that included dancing, karaoke and an appearance by musician Hunter Hayes.

His Importance to Nashville

I am not sure if there is an athlete more synonymous with Nashville than Rinne. He signed his first contract with the Predators in 2005 and has been donning a gold jersey ever since. Throughout his career, he has been a Vezina Trophy finalist four times and won the honor in 2018. He has been a staple to the city of Nashville and role model for his teammates.

“He’s just been such an incredible person on and off the ice, especially off the ice,” Predators’ defenseman Mattias Ekholm said this past Wednesday in an interview with Michael Gallagher from the Nashville Post. “He just conducts himself to the game in a way that’s just pure class. I don’t have enough good things to say about him. He’s been a leader in the city, in this community, and he’s going to go down as one of, if not the greatest Predator to ever put this uniform on… There’s probably not another player I have more respect for than him.” (from “Rinne named a finalist for King Clancy Trophy, an award tailor made for him”, Nashville Post, 06/04/2021)

The winner of the King Clancy Trophy will be announced later in the postseason. The winner will receive a $25,000 donation to the charity of their choice while the two runners-up will each receive a $5,000 donation. Seeing what Rinne has done for the city of Nashville, he more than deserves to take home the award. Throughout his career, Rinne has proved his not only valuable in goal, but off the ice as well.

Hey fellow hockey fans! I am a freelance writer elated to be covering the Nashville Predators. I have been a hockey fan since Steven Stamkos was selected first overall. It was a beautiful time when Scott Niedermayer was still on the ice and Zach Parise was reaching his prime as a New Jersey Devil. During the NHL season you can find me at a hockey arena near you with nachos in one hand and a glass of wine in the other.