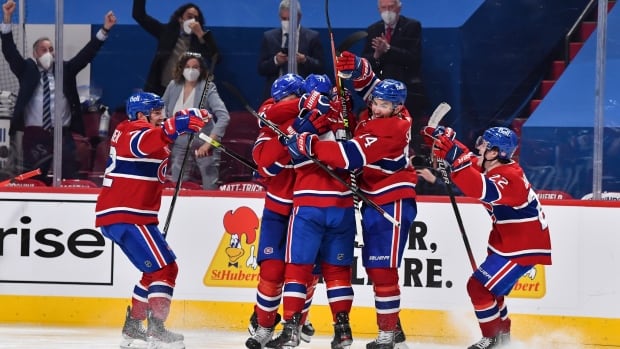 While the Montreal Canadiens have had plenty of success over their rich history, playing in the final four of the NHL post-season is uncharted territory for many on the current roster.

Fortunately for the Habs, there’s no shortage of alumni who have been there before and can lend their considerable expertise to a group heading into a semifinal showdown with either the Vegas Golden Knights or the Colorado Avalanche.

The team got a pep talk from one of the franchise greats when Bob Gainey stopped by to address the squad at Wednesday morning’s team meeting.

“A lot of guys here, myself too, have not been in this position” Canadiens defenceman Erik Gustafsson said. “To see [Gainey] coming in here and talking to us is huge.

“I got a lot of chills when he talked about the big games he played.”

Gainey earned another ring in 1999 as general manager of the Dallas Stars and was GM of the Canadiens from 2003-10, twice serving as interim head coach over that span.

“Obviously we’re plenty motivated, didn’t need a ‘rah-rah’ speech, but it’s just nice to hear from someone who’s been through this,” forward Brendan Gallagher said.

“When you can draw back on someone with that much experience, that much knowledge and that much success … when you look around the room everyone was listening intently.”

Rob Pizzo breaks down the team’s shocking run to the final four. 4:59

Montreal’s journey has been a tale of two series — a battle back from 3-1 down to knock out Toronto in the first round then a sweep of Winnipeg in the North Division final.

The Habs will face a new hurdle when they play Game 1 of their semifinal in either Las Vegas or Denver — with an arena filled with thousands of fans cheering on the opposition. NHL arenas in the U.S. have been home to large crowds as COVID-19 restrictions in that country relax.

“Home-ice advantage really is a thing with fans in the building,” Gallagher said. “They just create so much energy for the teams and you’re really able to feed off that.”

While nowhere near the Bell Centre’s capacity, the Canadiens have been welcoming modest crowds of around 2,500 to the last three home playoff games. Gallagher said even that small of a crowd can give an edge, and he seems to be supported by the scoreboard.

Toronto took two games in an empty Bell Centre in the first round, but the Canadiens have won three straight since fans started to return once Quebec loosened some of its COVID-19 restrictions.

Regardless, the Canadiens will be the statistical underdogs next round against either Vegas, which leads its semifinal 3-2 heading into Game 6 on Thursday, or Colorado.

The Avalanche and Golden Knights both finished the regular-season with a league-high 82 points, while Montreal’s 59 points was fewest among playoff-bound teams.

Gallagher said the Canadiens know what they have to do to be successful, and when they do they can beat a good team.

“When we started the season we told you guys the same thing — we’re confident in this group,” Gallagher said. “When we made the playoffs I understand there was probably a lot of doubt outside our locker room, but not within it.”