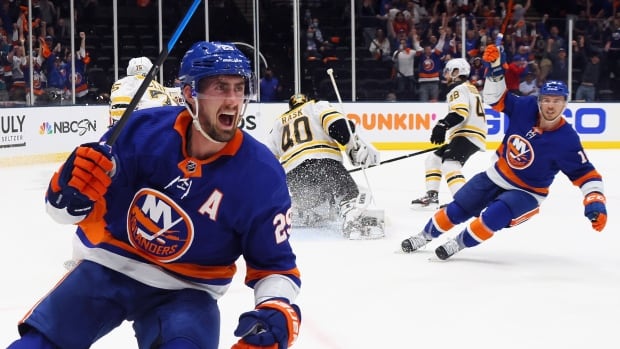 The New York Islanders got another big second period and ran past the Boston Bruins for a return trip to the Stanley Cup semifinals.

Brock Nelson scored twice in New York’s three-goal second, Semyon Varlamov stopped 23 shots and the Islanders beat the Bruins 6-2 in Game 6 on Wednesday night in a front of a raucous home crowd at Nassau Coliseum.

“It was awesome,” Nelson said. “The place was rocking tonight. The fans were feeding us energy. The team played great. One of those nights [coach] Barry [Trotz] touched on after the game, you’ll always remember moments like that. That was a big game, a big team effort from everybody.”

“You need everyone going to beat a team like that,” Bailey said. “I thought from Varly right on out, everyone in the lineup was contributing, playing the way we needed to play to get the win. Certainly happy to move on.”

The Lightning beat the Islanders in six games in the bubble in Edmonton last year.

“We feel we have some unfinished business,” Bailey said. “We’ll enjoy tonight and we’ll start getting ready.”

Brock Nelson’s 2nd goal of the game is the winner as New York beats Boston 6-2. The Islanders advance to the Stanley Cup semifinals and will face the Tampa Bay Lightning. 1:03

Brad Marchand scored twice for Boston, and Tuukka Rask made 23 saves. The Bruins, who reached the Stanley Cup Final two years ago, were eliminated in the second round for the second straight year.

“They’re a good defensive team,” Bruins coach Bruce Cassidy said. “They manage pucks clearly better than us. We’re not getting those free chances they got in terms of mismanaging pucks. They do play a good game that way, they don’t beat themselves.”

With the Bruins on the power play, Marchand got the puck in front of the net and put a backhander past Varlamov from the right side at 5:38 of the third to cut Boston’s deficit to 4-2. It was Marchand’s fifth of the series and eighth of the postseason.

The Islanders’ stifling defense limited the Bruins to just five shots on goal in the third. With the minutes winding down on Boston’s season, New York hemmed the Bruins in their end of the ice, preventing them from pulling Rask for an extra skater until 1:25 left.

Clutterbuck scored an empty-netter with 59 seconds left to seal it, and Pulock added another 11 seconds later.

After outscoring the Bruins 8-3 in the middle periods of the first five games, New York had three more in the second — for the third time in the series.

Nelson stole the puck from Matt Grzelcyk. took off on breakaway and beat Rask into the top right corner at 5:20 to put New York up 2-1.

New York edges Boston 5-4 as they score 3 goals on the power-play. The Islanders lead the series 3-2 and are one win away from advancing to the next round. 1:01

Bailey stole an outlet pass from Rask and fed Nelson streaking to net, and Nelson beat the goalie from the right side with 7:23 left in the second for his second of the night and sixth of the playoffs.

With the Bruins trailing 3-1 in the elimination game, Cassidy broke up his Perfection Line of David Pastrnak-Marchand-Bergeron.

However, the Islanders stretched the lead to 4-1 as Adam Pelech sent a shot from the left point that was stopped by Rask. However, Palmieri swooped in, took the rebound and put it in from the right side for his seventh of the postseason.

“They found ways to win, so give them credit,” Cassidy said. “They were much more opportunistic than us.”

The Islanders got on the scoreboard first. After a faceoff in the offensive zone, Noah Dobson fired a shot from the right point that was stopped by Rask. However, the rebound kicked out in front and Zajac grabbed it and put it in at 8:52 for his first goal this postseason.

Boston went on the power play with 5:47 left in the first when Anthony Beauvillier was whistled for tripping Charlie McAvoy. Casey Cizikas was called for a tripping penalty as well with 4 minutes remaining, putting the Bruins on a 5-on-3 for 14 seconds.

It drew chants of “New York Saints! New York Saints!” from the crowd, a reference to what Cassidy called the Islanders when complaining about the imbalance in penalties after Game 4.

“We hear some of the chants,” Bailey said. “Tonight was an incredible atmosphere out there.. I think we really fed off it.”

Marchand tied it with 2:24 remaining as he got a cross-ice pass from Pastrnak in the right circle and quickly bet Varlamov high on the glove side.