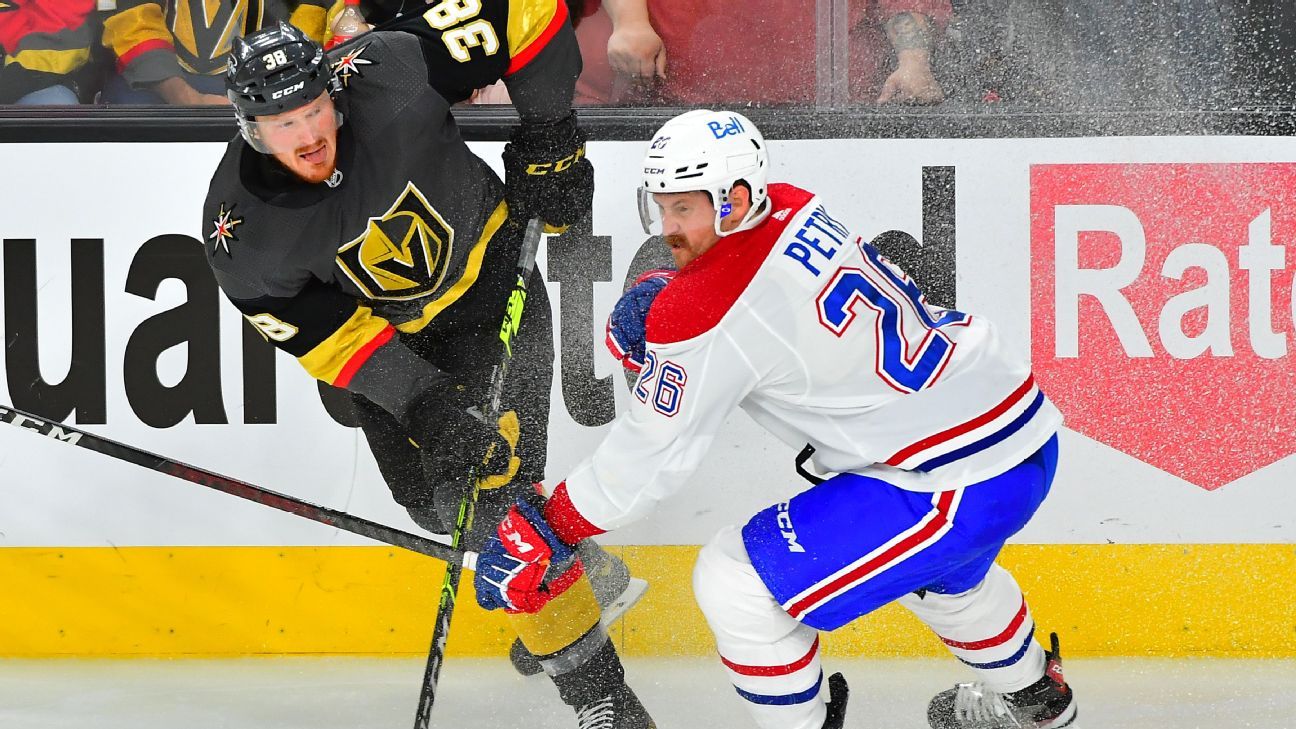 LAS VEGAS — Montreal Canadiens defenseman Jeff Petry returned to the lineup on Wednesday — and it was quite a sight.

The defenseman, who missed the previous two games with an “upper body injury” took the ice with extremely bloodshot eyes. The condition was later revealed to be subconjunctival hemorrhage, which is broken blood vessels under the cornea. Still, Petry played more than 20 minutes in the Canadiens’ surprising 3-2 win over the Vegas Golden Knights, blocking two shots, taking two of his own and contributing an assist.

“He’s scary looking,” goaltender Carey Price said. “But he’s obviously a big part of our team and he had a big game tonight.”

Added Petry’s defensive partner, Joel Edmundson: “His eyes looked like that for a week now. But it didn’t seem like it affected him tonight.”

The Canadiens evened the semifinal series with the Golden Knights, 1-1, with Game 3 on Friday in Montreal.

“No, it’s not allergies,” Julie Petry wrote. “No, it’s not after a couple nights in Vegas. No, it’s not bloodshot because he’s tired. No, they don’t hurt or bother him. All related to his ‘upper body injury’ but let me tell you he looks a lot better than he did a week ago.”

Petry had been out since Game 3 of the second-round series against the Winnipeg Jets when he suffered an apparent hand injury. It’s unclear how or whether that is related to his eye condition; Petry was not made available to speak to reporters on Wednesday.

The 33-year-old was Montreal’s best defenseman this season, ranking second on the team with 42 points (12 goals, 30 assists) through 55 games, while also leading all skaters in ice time.

Canadiens coach Dominique Ducharme previously said he would insert Petry back into the lineup only if he was “close to 100%.”

“If he could have, he would have come back earlier,” Ducharme said after the Game 3 win. “Even when it happened, he wanted to try to play against Winnipeg in Game 4. It’s good to see him back and see the way he played. He’s an important player for us. He’s a gamer. Every time that you get in critical moments, big games, you see him at his best.”

The Canadiens also welcomed defenseman Jon Merrill, a former Golden Knight, back into the lineup. Forward Jake Evans, who was concussed after getting hit by Mark Scheifele in the second round, still has not been cleared for contact. Ducharme previously said the team was hopeful all three injured players would be able to play in this series.

The Canadiens once again came out strong in the first period — and this time, they were able to score first. Playing with a lead has been a hallmark of Montreal’s surprising run so far – including a remarkable 437-minute, 8-second stretch without trailing, which is the second-longest streak in NHL playoff history.

Montreal led 2-0 after the first period, then grabbed a 3-0 lead off a pretty breakaway goal by Paul Byron in the second. It marked just the third time the Golden Knights have trailed by multiple goals in a playoff game in Las Vegas.

“For whatever reason our starts in the playoffs haven’t been good enough,” Vegas captain Mark Stone said. “We’ve gotten burned before and we got burned again tonight.”