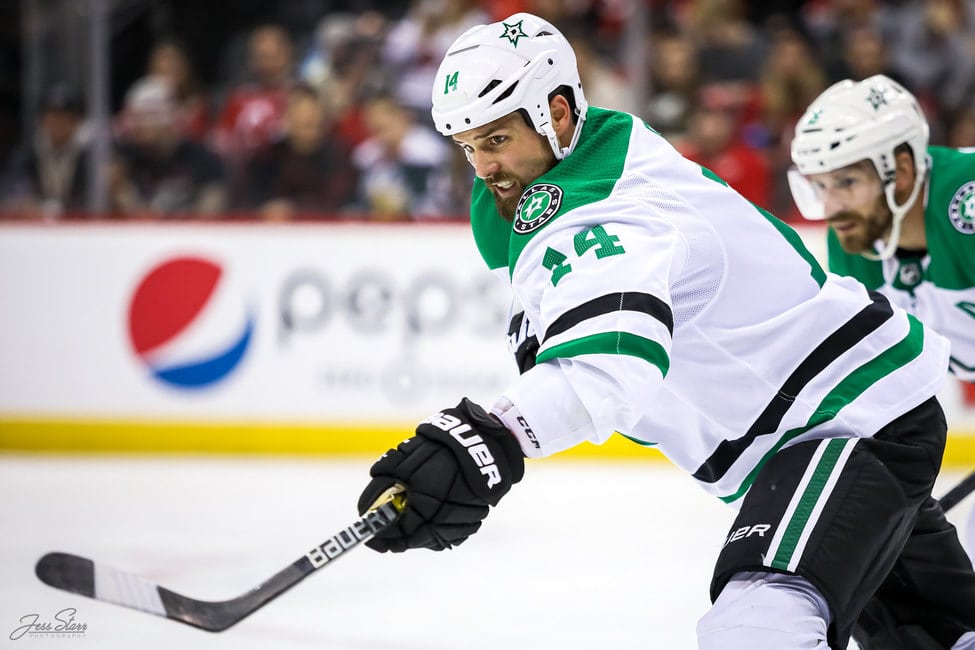 This shortened 56-game season was a unique one for many Dallas Stars players, including their captain Jamie Benn. Coming off of a dominant performance in the Edmonton bubble that led the team all the way to the Stanley Cup Final, Benn experienced ups and downs and a move to center that could ultimately change the Stars’ outlook heading into next season.

Right out of the gate, Benn struggled to produce offensively this year. In his first 33 games, he had just seven goals and 18 total points, and was a plus-2 over that span. With Tyler Seguin unavailable due to his offseason surgery, Benn had trouble settling in and finding an offensive rhythm, spending much of his time on a line with defensively focused Jason Dickinson and the struggling Denis Gurianov. It’s safe to say the absence of Alexander Radulov also made a difference, not only for Benn, but for the entire Stars’ forward group. For three consecutive seasons prior to this one, Benn, Seguin, and Radulov were the top-three point producers for the Stars. Without his typical linemates available, Benn was often left playing the role of a depth checking forward.

Then, in the Stars game against the Chicago Blackhawks on April 8, head coach Rick Bowness moved Benn to center. The move inspired a dominant streak from the captain. In the 11 games immediately following his switch to center ice, he registered 13 points and was a plus-11 while the team went 8-1-2 and got themselves back into the conversation for the final playoff spot in the Central Division. After that, though, he sputtered offensively as the team endured a five-game winless stretch where Benn was held off the scoresheet entirely and sported a minus-5 rating, ultimately closing the door on Dallas’ chances to qualify for the playoffs. Benn ended the season with 11 goals, 35 points, and a plus-13 rating.

Benn’s mark of 0.67 points per game (P/GP) this year is the third-lowest out of his 12 seasons in the NHL. With that, three of his four worst P/GP seasons have come consecutively in the three most recent campaigns. On the surface, it might seem like his best days are behind him and he is facing a rapid decline. Adding some context to the system that he has been playing in makes the picture much clearer.

The best seasons of Benn’s career, according to the numbers, came between 2013 and 2016, when he recorded 79, 87, and 89 points in consecutive seasons. In those three years, the Stars fielded a dynamite offense that led to them being 11th, second, and first in the league in goals scored. The one problem? Those three seasons yielded just seven playoff wins, all coming in the 2015-16 season when the Stars lost in the second round in seven games to the St. Louis Blues. Both of the other seasons saw the team fail to qualify for the postseason despite their offensive talent. As we see so often in the NHL, even the teams that are able to outscore their problems in the regular season seem to have little success in the playoffs. The formula for making a deep run in the playoffs is almost always a defense-first, tight-checking system, which is where the team went next.

Following the 2016-17 season when the Stars ranked 29th in goals against, they flipped the narrative and ranked seventh, second, second, and eighth in goals against, effectively becoming one of the most defensively responsible teams in the league. With that shift in mindset, the offense naturally suffers. The numbers support that, showing that in that same span, the Stars ranked 18th, 29th, 28th, and 18th in goals for. This season, without their usual offensive firepower, the Stars averaged just 2.79 goals per game. For comparison, they scored 3.23 a night in Benn’s 89-point season. This concrete shift in the team’s identity showcases why Benn should not be judged on his ability to match the large offensive outputs he had earlier in his career.

All things considered, Benn had a decent season on a struggling team while dealing with a shortened schedule and instability with linemates. He was fourth in scoring among forwards with 35 points, only behind the excellent top line of Jason Robertson, Roope Hintz, and Joe Pavelski. While I expect that he will move back to the wing in order to play alongside longtime linemate Tyler Seguin, Benn’s demonstrated success at center this season gives Bowness options heading into next season. The Stars will be looking to him for more offense and to be ready to lead this Dallas Stars team that feels poised to take one last stab at a Stanley Cup with this core.

Dallas Stars writer at ‘The Hockey Writers.’ I grew up playing ice hockey in Los Angeles but was introduced to the game when I saw my first professional hockey game at American Airlines Center in 2006 and I’ve been a Stars fan ever since.  I currently play hockey and study psychology at Stanford University and spend my free time watching and writing about hockey.  Check out my personal website MuffinHockey.com and my articles at the Stanford Daily Newspaper!