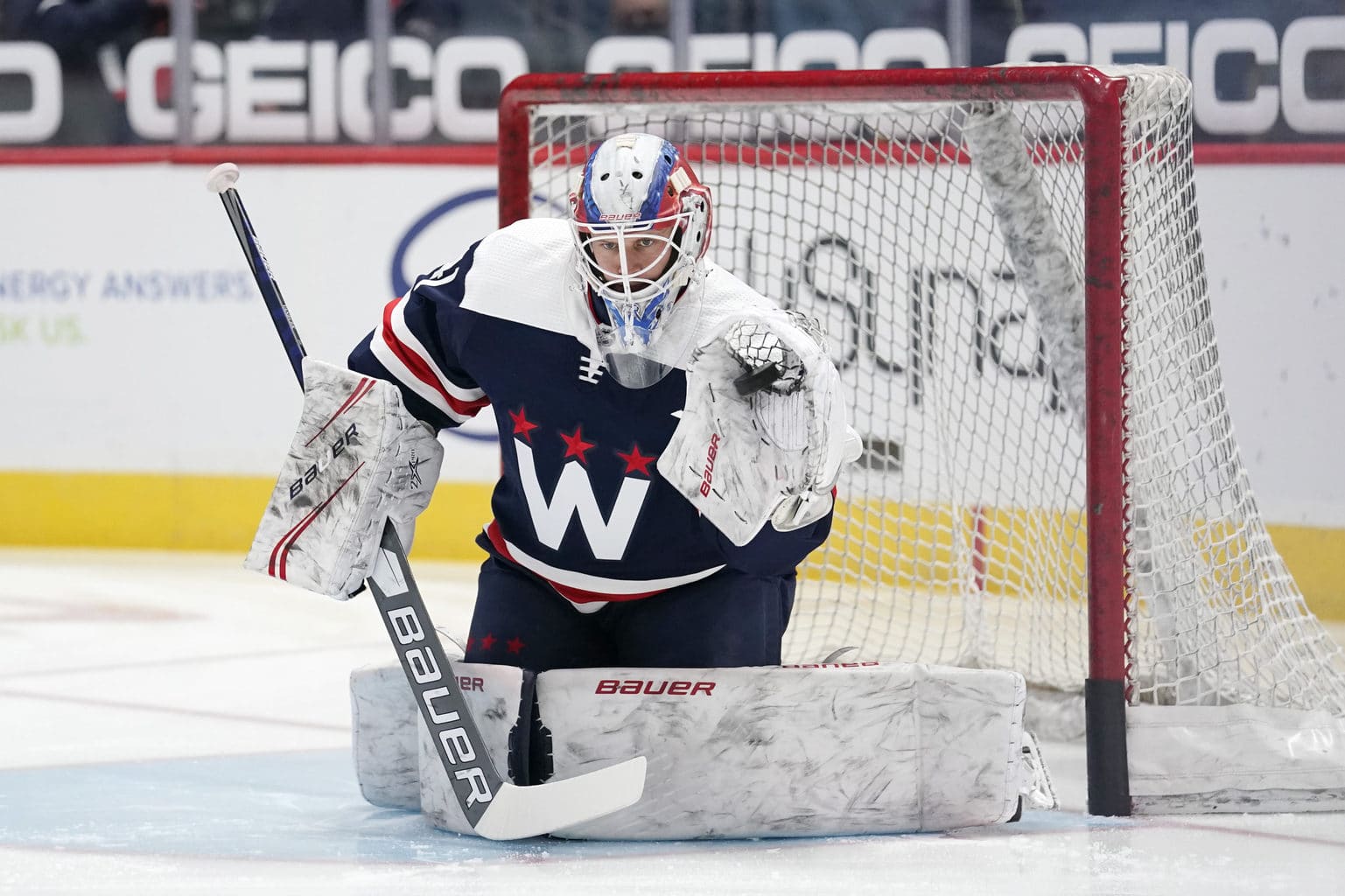 The Seattle Kraken selected goalie Vitek Vanecek from the Washington Capitals during the 2021 NHL Expansion Draft on Wednesday evening. News of the pick was first reported earlier in the day by hockey insider Frank Seravalli.

The Kraken hope to have similar success to the 2017 Vegas Golden Knights, though Vanecek isn’t as established as Marc-Andre Fleury. Seattle’s three-goalie quota was met with the signing of Chris Driedger (Florida) and the selections of Joey Daccord (Ottawa) and Vanecek. The netminder’s departure saves Washington just $716,667 against the cap.

Vanecek, 25, along with fellow goalie Ilya Samsonov, was rumored to be the Kraken’s pick for the last month. Though the goaltender is early in his career, he could become a viable option between the pipes for Seattle.

Standing at 6-foot-2 and a slim 187 pounds, Vanecek will fight for a primary role for the Kraken. In Washington, he split time with Samsonov in net, starting a majority of the games — though not even an option at the beginning of the season — and stepped up during key stretches of the year. While managing the crease, Vanecek went 21-10-4 and posted a 2.69 goals-against average (GAA) and a .908 save percentage (SV%) during the shortened 2020-21 campaign. He started 36 games in his first NHL season.

A native of the Czech Republic, Vanecek has been playing hockey since he was young. As a youth, he competed for HC Havlíčkův before joining HC Bílí Tygři Liberec in 2013 after becoming of age. He was then selected 39th overall by the Capitals in the 2014 NHL Entry Draft, signing a three-year entry-level contract.

The goalie didn’t make the move to the states immediately. He played a majority of the 2014-15 season in the Czech Republic for HC Benátky nad Jizerou where he appeared in 20 games with a 2.24 GAA and a .925 SV%. The following season, he made the move to North America, splitting time between the Capitals’ affiliates, the South Carolina Stingrays of the ECHL and the Hershey Bears of the American Hockey League (AHL). He was named to the ECHL All-Rookie team in 2015-16.

In 2019, Vanecek made the AHL All-Star roster for the first time, and the following season he was awarded the AHL All-Star Game MVP. The budding goaltender was recalled by Washington after Henrik Lundqvist’s unfortunate health issue and Samsonov’s first stint on the COVID-19 protocol list. Vanecek debuted on Jan. 15, winning his first start 2-1 against the Buffalo Sabres.

From there, Vanecek earned the trust of head coach Peter Laviolette, especially after winning the NHL’s Rookie of the Month in January. Once again, Samsonov was placed on the COVID-19 list later in the season, and Vanecek was officially thrust into the spotlight and considered the top option in net for Washington. Laviolette stuck with the rookie the majority of the season, but he was injured in Game 1 of the Capitals’ first-round matchup against the Boston Bruins in the 2021 Stanley Cup Playoffs.

What Vanecek Brings to the Kraken

The goalie brings excitement, hope, and youth to Seattle, but also uncertainty. Though he played well for Washington, the sample size of NHL experience will be tough for Kraken head coach Dave Hakstol to gain assurance that Vanecek is the long-term future of the team.

In terms of a fresh franchise, Vanecek’s projections are up in the air considering he will most likely back-up Driedger and compete with another young netminder in Daccord. The Golden Knights were placed in a similar situation in 2017 when the Capitals left then-goalie Philipp Grubauer unprotected, but they ultimately didn’t select the 2020-21 Vezina finalist (ironically, Fleury, still on the Golden Knights, won the award last season). At the same age as Vanecek at the time, Grubauer’s stats were slightly better heading into that expansion draft, but he had played in fewer games.

Vanecek has the talent to prove he was the right pick for Seattle in this spot if given enough opportunities to earn Hakstol’s trust like he did Laviolette’s. The goalie has shown he can be the primary option and his ceiling is incredibly high. He can either become a long-term quality starter for the Kraken or a possible trade asset if Driedger works out. As was the case with Malcolm Subban and the Golden Knights.

Still on the Capitals

With Vanecek being selected, plenty of notable names remained on the Capitals’ roster. Nothing is set in stone, however. Washington has a big offseason full of tough decisions. Captain Alexander Ovechkin’s contract must be met and finalized, cap space needs to be found, and the roster has to get younger.

Vanecek’s departure only frees up $716,667 in cap space as mentioned earlier, which doesn’t give Washington much flexibility in free agency. The team has also officially committed to Samsonov in net going forward, which is risky because the goaltender, though very talented, has yet to prove consistency and durability. Samsonov, 24, is a restricted free agent with arbitration rights, so a weighted extension will surely be met by management eventually, only making the team’s cap space that much tighter. A bridge deal is almost certain this offseason now, especially considering a veteran free agent goalie will cost more against the cap than having both Samsonov and Vanecek on the roster.

Since both young goalies posted very similar numbers, Vanecek outperforming Samsonov slightly, perhaps the team protected the wrong netminder — especially from a future financial aspect. Vanecek, still on a rookie contract, would have been a restricted free agent in 2022-23.

Or the future could be bright; there’s a lot of uncertainty with no safety net in goal. Look for Washington to have a busy summer on the trading block now. Some key big names include Brenden Dillon, Nick Jensen, Evgeny Kuznetsov, and Dmitry Orlov.

Author. Master Journalist (so the degree says). I specialize in music, the publishing industry and sports. Hockey has always been a passion of mine, and though it is one sport I never played on ice–not many options in the desert–it is one I follow. I’m a Washington Capitals fan, and besides 2018, it’s been a frustrating journey. I love it.