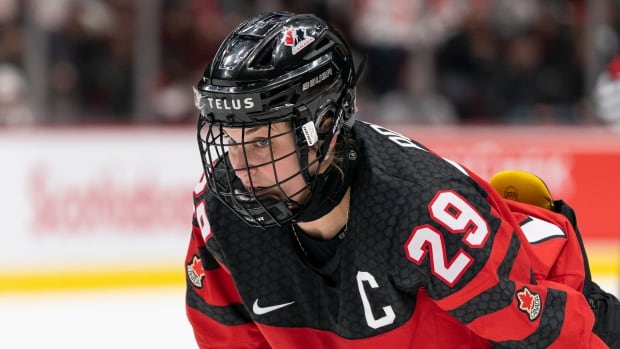 This is an excerpt from The Buzzer, which is CBC Sports’ daily email newsletter. Stay up to speed on what’s happening at the Tokyo Olympics by subscribing here.

Canada’s women’s hockey team is back

For the first time in more than two years, Canada’s women’s hockey team will hit the ice for a major international tournament.

Canada’s first game is Friday at 6 p.m. ET against Finland. Here’s everything you should know about the upcoming world championships:

They’ll be held in Calgary. The tournament was originally set to take place in Nova Scotia last April, but was cancelled due to the pandemic. The province was subsequently awarded the 2021 event to begin in May, but it kiboshed plans two weeks before puck drop with the province’s premier saying there was too much of a COVID-19 risk. Hockey Canada then pivoted to Calgary’s WinSport Arena, which hosted the curling bubble from February into May. And that’s how you end up with a significant hockey tournament in the depths of August.

Canada hasn’t won since 2012. That’s because the U.S. has taken five consecutive titles and eight of the last nine. If the Americans wind up as 2021 champions, they’ll equal Canada’s total of 10. The North American neighbours are the only two countries ever to win the tournament, which began in 1990. Ten teams will compete in the 2021 event, with eight reaching the quarter-finals. All knockout rounds are single-elimination.

The next half-year is Canada’s chance to reclaim its spot atop women’s hockey. The recent U.S. dominance, which also includes 2018 Olympic gold, has it firmly implanted as the No. 1 team. However, if Canada can win worlds and follow it up with Olympic gold next February in Beijing, the pendulum will have swung back to the north. But it won’t be easy against an American side loaded with the likes of Kendall Coyne Schofield, Brianna Decker and Hilary Knight.

A new contender has emerged. After Canada battles Finland, it has games every two days at the same time until next Thursday’s showdown with the U.S. But Canadian players have likely had the Finland matchup circled since their stunning 2019 semifinal loss. Canada wound up with bronze, its worst-ever finish in a major tournament, and it’s been sitting on that result ever since. Wednesday’s pre-tournament victory over Finland won’t do much to quell that pain yet, either.

Finland controversially lost the 2019 championship. The team’s worst video-review nightmare became reality when officials reversed an overtime goal after 10 minutes of examining the play for goalie interference. The Americans would eventually win in a shootout, with star Finnish goalie Noora Raty saying after the game that she would have preferred to lose 5-0 instead.

Marie-Philip Poulin is healthy. The Canadian captain played less than five minutes at the 2019 tournament as she dealt with a knee injury, and it’s no coincidence a disappointing team result followed. In 129 international games, Poulin has recorded 140 points. Her absence would be like the national women’s soccer team playing without Christine Sinclair. In fact, Poulin said Sinclair and Canada’s Olympic gold medal immediately inspired her own troops. Read more about their connection here.

The Canadian crease is up for grabs. Shannon Szabados, the starter at the past three Olympics, won’t be with the team as she continues to take time off following the birth of her daughter last August. It sets up a battle between Ann-Renée Desbiens, 27, and Emerance Maschmeyer, 26, to take the reins in Calgary and potentially hold them through Beijing. An important job, to say the least.

You can read a full preview of the tournament here.

King Henrik is vacating his throne. Legendary New York Rangers goalie Henrik Lundqvist announced his retirement today after sitting out last season following open-heart surgery. The season will wind up as good trivia at some point as the career Ranger signed with the Washington Capitals but never played a game. And Lundqvist should wind up in the Hall of Fame: his 459 wins are sixth in NHL history and he won the Vezina Trophy as the league’s top goalie in 2012. He also led Sweden to Olympic gold in 2006 and silver in 2014. Read more about Lundqvist’s exceptional career here.

Novak Djokovic’s path to the Grand Slam is open. His hope of becoming the first man to win the Golden Slam ended in Tokyo, but Djokovic is still staring down a massive accomplishment — one that neither Roger Federer or Rafael Nadal ever achieved. And now the Serbian won’t have to face either when the U.S. Open begins at the end of the month. Nadal’s announcement today that he is out for the season with a foot injury comes on the heels of Federer saying he would be down for “many months” after knee surgery. Meanwhile, defending champion Dominic Thiem is also missing the U.S. Open with a wrist injury. And so the coast is clear for the top-ranked Djokovic to cement his legendary status: if he completes the Grand Slam in New York, he’ll also break a three-way tie with Nadal and Federer for most career major victories with his 21st.

Felix Auger-Aliassime upset his friend. The Canadian was a clear underdog heading into his round-of-16 match against eighth-ranked Matteo Berrettini, but bucked the odds to book his spot in the Cincinnati Open quarter-finals with a straight-sets victory. Up next for No. 17 Auger-Aliassime is third-ranked Stefanos Tsitsipas. Auger-Aliassime, who picked up his first win over Berrettini after falling to him in the Wimbledon quarter-finals, became close with the Italian as their girlfriends are cousins and said he’s one of his “best friends” on tour. But Berrettini still holds a 2-1 edge all-time in head-to-head matchups. On the women’s side, No. 2 Naomi Osaka was stunned by No. 76 Jil Teichmann. And Canada’s Gabriela Dabrowski, fresh off her women’s doubles victory on home soil at the National Bank open, was in semifinal action alongside Brazilian partner Luisa Stefani at our publish time. Read more about Auger-Aliassime’s victory and other results from the tournament here.

Kyle Lowry’s return to Toronto should come on Feb. 3. That’s when the Miami Heat are scheduled to visit the Raptors, per the NBA schedule released today. But Lowry’s homecoming hinges on two things: his health at the time and the Raptors’ whereabouts. The team, which spent last season in Tampa, appears hopeful of playing in Toronto, judging by this video. There’s been no official announcement yet. The 2021-22 season begins with a home game against Washington on Oct. 20.

Coming up on CBC Sports

CEBL championship weekend: Both semifinals go tonight, with Niagara vs. Fraser Valley at 7 p.m. ET followed by Edmonton vs. Ottawa at 9 p.m. ET. The winners of those games will meet in Sunday’s championship at 4 p.m. ET. All are available on CBCSports.ca, with the title game also airing live on CBC-TV. Read more about the playoffs here and learn about one of the league’s brightest young stars here.

Diamond League: The Prefontaine Classic in Eugene, Ore., will be available live on CBCSports.ca and CBC-TV on Saturday at 4 p.m. ET here. The meet features the return of Andre De Grasse following his three-medal Olympics, as well as previously suspended American sprinter Sha’Carri Richardson. We mistakenly wrote in yesterday’s newsletter that Richardson ran a wind-aided 9.64 seconds at U.S. Olympics trials and an official season-best 9.72. Those times should read 10.64 and 10.72. Click here for a full breakdown of the event.

You’re up to speed. Have a great weekend.