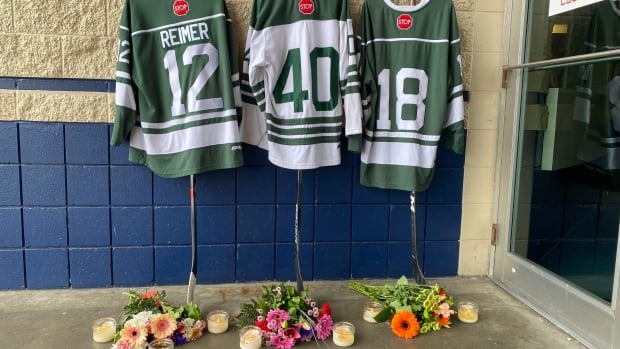 The three teens, who were members of the Delta Hockey Academy, were killed after a vehicle crashed into a tree in Surrey, B.C., early Saturday morning.

“The relationships a coach builds with the players is beyond special,” Tim Preston wrote on Facebook. ”I will never forget the times spent with these three incredible young men.”

He and fellow coach Shawn McBride started a memorial at Delta’s Planet Ice hockey rinks featuring the victims’ jerseys and candles, “to show our love for Caleb, Ronin and Parker.”

The Edmonton Oil Kings hockey team issued condolences to the teens’ families in a statement on Sunday. General manager Kirt Hill described Reimer, 16, who was drafted to the team, as “a young man with a bright future both on and off the ice. He was a person that you loved to be around, he was a great teammate and a great friend.

“I will never forget the first phone call we had the day we drafted him to the organization and the excitement of Caleb on the other end of the line,” Hill said.

The Western Hockey League’s Vancouver Giants junior hockey team was one of many in the sports community to send condolences to the three players’ families over the weekend, as did the Kamloops Blazers, Prince Albert Raiders, Powell River Kings and other regional hockey teams.

“The entire Vancouver Giants organization would like to extend our deepest condolences to the families, teammates and friends of Delta Wild Hockey players Caleb Reimer, Ronin Sharma and Parker Magnuson,” the organization tweeted on Sunday morning.

Tali Campbell, general manager of the B.C. Hockey League’s Coquitlam Express Junior “A” Hockey Club, said he met Magnuson and Sharma through training camps, and he expressed his condolences to the families of all three players.

“When I got the news and heard who it was, your heart just breaks for their families, their friends, their teammates and the whole community,” Campbell told CBC News. “The hockey community is small.

“These three young men had a full life ahead of them — a full hockey career and life after hockey. It’s devastating news obviously when any life is lost, especially young people who have bright futures.”

Kevin Gallant’s teenage son played hockey with two of the victims, Reimer and Magnuson, in Cloverdale, and was friends with all three players.

These three young men had a full life ahead of them — a full hockey career and life after hockey– Tali Campbell, general manager, Coquitlam Express Hockey Club

“Such unthinkable tragedy today, the loss of three teenagers is staggering,” Gallant wrote on Facebook on Saturday. “All three went to Delta Hockey Academy and it was certain all three would make a positive mark in this world.”

The Surrey Eagles hockey team tweeted that ”even though we play for different teams, the hockey community truly is one big family” and said its members are “heartbroken.”

“Our deepest, most heartfelt condolences to everyone who knows and loves Ronin, Caleb and Parker,” the team tweeted.

Carla Qualtrough, who until the election was called was the member of Parliament for Delta, tweeted her condolences on Saturday.

“I am saddened to hear of the tragic passing of three young, promising team members from the Delta Hockey Academy…. Deepest condolences with the family and friends of Parker Magnuson, Ronin Sharma and Caleb Reimer,” she wrote on Twitter.

In an interview, Surrey RCMP Cpl. Vanessa Munn said the victims were 16 and 17 years old.

“This is just a tragedy, and even more tragic being that it involved three youths,” Munn said. “I’m sure the community as a whole is going to feel a great sense of loss.”

The Langley Rivermen, for whom Sharma played, is a member of the Mainland Division of the British Columbia Hockey League.

Even though we play for different teams, the hockey community truly is one big family. We are heartbroken to learn of the loss of three of our family early this morning.<br><br>Our deepest, most heartfelt condolences to everyone who knows and loves Ronin, Caleb, and Parker. 💚🏒 <a href=”https://t.co/FO0V3FId5s”>https://t.co/FO0V3FId5s</a>

On Twitter, Western Elite Hockey Prospects expressed its “heartfelt condolences” to the teens, stating there are “no words of comfort that can be given,” in the tragedy and adding, “Know that the hockey community is here for you all.”

Officers say they responded to reports of a crash on 104th Avenue near Highway 1 in the Fraser Heights neighbourhood at about 3 a.m. PT.

Cause of crash not yet known

The RCMP and emergency responders determined all three in the vehicle were dead.

Earlier in the day, Munn said it was too early to determine the cause of the single-vehicle crash.

Surrey Mayor Doug McCallum said in a statement on Saturday that city council sends its “deepest and heartfelt condolences to the families.”